Looking Back On Winter 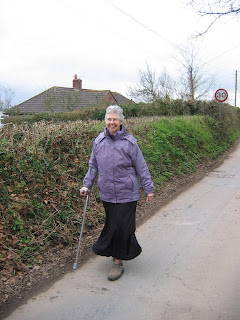 Well, we can hope, anyway! As we begin to plan to get moving again, there are some highlights from our 5-month stay in Blisworth that we would like to share with you . . .
First things first, and very good news, is that all the medics seem very happy with Val's first replacement knee operation. She had the 'op' on 28th January, a little earlier than expected, and just managed to get out of the hospital in Barnstaple before it was snowed in on 2nd February. Here she is, about 3 weeks later, already down to a single crutch, and stepping out along the road in Lapford. Since then, she was signed off by both the physio and the surgeon, then swapped the crutch for a walking stick, and now doesn't even use that!
We had to stay with Colin and Jan in Lapford a little longer than we had expected, as the physios insisted that Val had to straighten her leg a bit more – 2 weeks 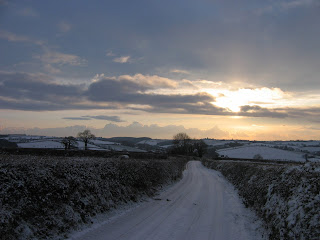 turned into 4! We had a little drama on 14th February, as Colin and Jan went off for a week's holiday (leaving us in residence) – there was an electrical fault and small fire which brought out three fire engines and the electricity board and left us without power for two days. The fact that we were there meant that Colin and Jan didn't need to come back home for the emergency, and may have helped to ensure that the fire didn't spread. Our candlelit supper wasn't just romantic but necessary!
The weather was wintry, of course, but that gave us some great views, especially in the early morning sunshine. 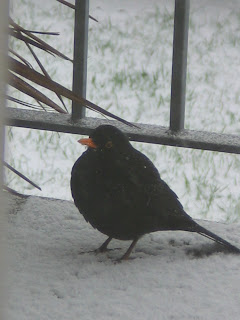 It also meant that the birds visited the bird table in good numbers! Here's a blackbird on Colin & Jan's patio.
Back in January, we had our share of snow and ice on the canal at Blisworth. The canal was frozen over for several days and the nearby flight of locks down to Northampton seemed to be preserved in a coating of snow. Sometimes friends ask us how we get on in the cold weather; it's much the same as being in a house, just get inside, shut the door and enjoy the central heating and the solid fuel fire! Outside DIY jobs have to be left until the warmer and drier weather, so we got on with some of the inside ones.
Recent new features inside Zindagi include a wooden shoe rack near the back door (needed this for a long time!) and lining the metal window surrounds with wooden mouldings. Although the end result does look better than the original metal surfaces, the main purpose was to reduce the condensation, and it seems to be working. 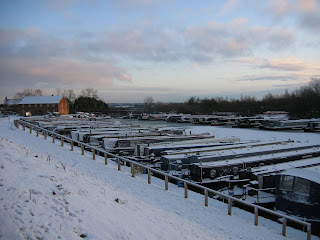 A more major task was to change our composting toilet. Without going into the details too much, we found that our 'Envirolet' never seemed to dry out as much as it should, so we have replaced it with a 'Nature's Head' model (another composting one), which separates liquids and solids 'at source'! Having successfully removed the old one and thoroughly cleaned it, the new one was a doddle to install, and we have even managed to sell the old one on eBay.
The 'Nature's Head' looks good, but the real test 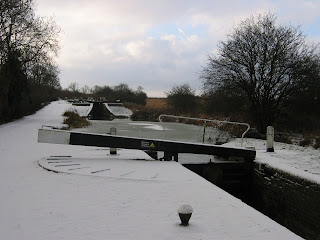 will be as we leave the land-based facilities of the marina and start travelling again. We'll spare you any pictures of this operation – just enjoy the winter canal scenery around Blisworth!
Having spent so long in Lapford after Val's op, we only had about 2 weeks back here in Blisworth before she was due to see the surgeon for her 6-week check up, so we were back to Devon again on 11th March and, as we said at the top of this, the surgeon was very pleased with her progress. We asked about a date for the second knee, hoping that the original estimate of 'about 3 months later' would be confirmed. Unfortunately, Val was told that she would be back on the waiting list, which means probably at least 3 to 4 months wait from mid-March. Ah well, more recovery time, and more time to cruise down the Nene, the Great Ouse and the Cam! 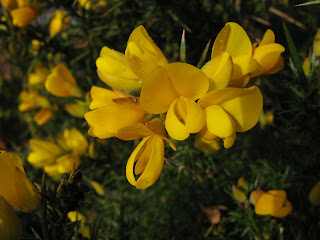 While down in Devon last time, Val had arranged for a medication review and had been told beforehand that no blood tests would be necessary. Then, at the review, she was told that she would need them! Too late, we were going back to Blisworth, so she arranged to have them done this time – which meant waiting about a week for the results.
Instead of imposing on Colin and Jan again (plus they were getting on with major decorating!), we went and stayed with David and Mary in Okehampton, and so had the opportunity to spend time with them and get some more tastes of Dartmoor again. 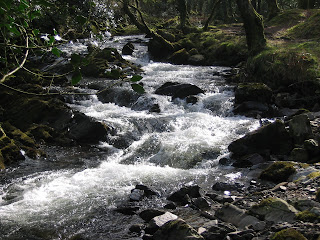 The gorse was coming into prolific bloom, with its characteristic 'coconutty' smell, and the East Okement river caught its sparkles, even in its deep shady valley. One morning, Dave was surprised to get quite close to a roe buck!
The blood tests were OK, – no need to change any of Val's medication – so we could head back to Blisworth, but we didn't . . . we set off for Shrewsbury instead! 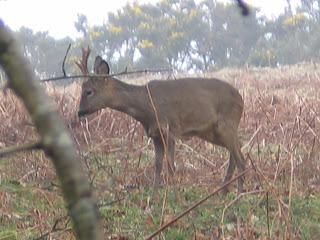