Enjoying The Dales – and The Family! 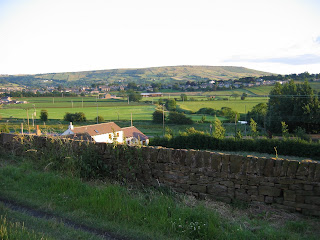 We seem to have been pottering up and down in this beautiful part of the world for a long time! After Colin and Jan left, we had a few days before Shireen and Thor were coming to visit, so we just chugged back south a bit, down near the village of Kildwick, where the canal seems to perch on the edge of the broad sweep of Airedale. None of our pictures really do this area justice, but you will not be surprised to learn that we have been enjoying it immensely. There are dramatic views and 'secret' corners – great! 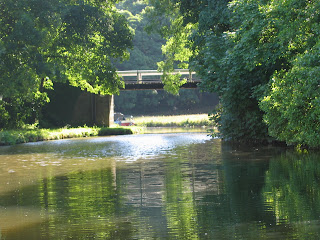 After enjoying this view for a couple of days, we went on to Silsden and a little beyond, where we turned the boat around and enjoyed another two days in one place. The tennis was on, so no need to tell you what Val was doing!
Then back to Skipton, where we filled up with diesel (getting more expensive!) 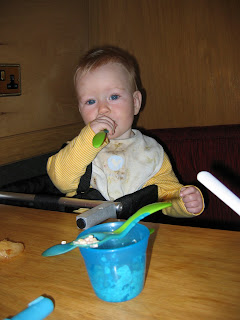 and moored withing very easy walking distance of the station to meet Shireen and Thor on July 3rd.
As expected, Thor had grown lots since we last saw him in March. Not just in size, either – he is taking an active part in feeding himself, and seems to be by-passing crawling in favour of walking, so there were plenty of walks up and down the length of 'Zindagi'. All this at the tender age of 8 months!
So, back up into the wilder areas again. Here's a view from the locks at Bank Newton – as you can see, the weather was a bit cloudy, not exactly what we were expecting in July!
With Colin and Janet, we had turned around just east of Foulridge Tunnel. Now, with Shireen and Thor, 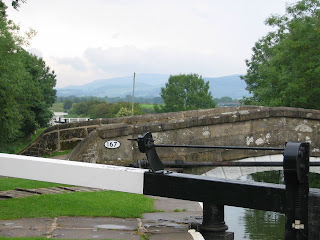 we had the opportunity to go a little further before turning round, as we didn't need to be back in Skipton until July 14th, so we went through the tunnel and down Barrowford Locks to Nelson in Lancashire. Foulridge Tunnel is controlled by 'traffic lights' so that boats are only travelling through it one way at a time, so here we are going in on the green lights. About 20 minutes through a dead straight tunnel, with surprisingly few drips after all the rain of the previous few days! 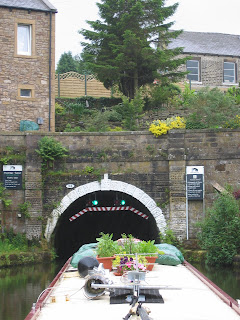 The seven locks at Barrowford are the first of the long descent down the western side of the Pennines, and all that we were going to tackle this time – back to those a week or two later! On the way down, we spotted the oldest-dated lock gates that we have seen, built in 1967, the year Dave first went to India and five years before we were married! Certainly seems to prove that steel lock gates last longer, though there were probably very few boats through the locks 41 years ago, as commercial traffic was on the wane and the canals had only just started to be 'discovered' by the leisure industry! 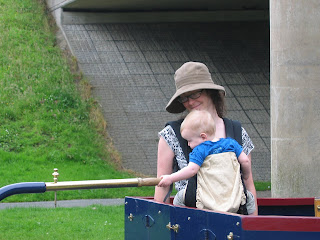 At the same lock, Thor showed some interest in the tiller, but the boat wasn't moving at the time! 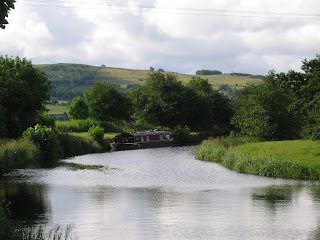 At Nelson, we turned around and headed back up the locks, through the tunnel and on our way back to Skipton. On the way, despite more rain, there were still great views to be seen, this one near Salterforth. 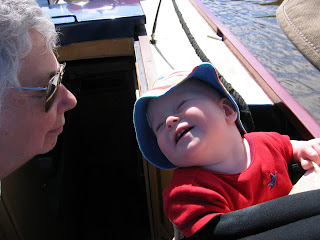 . . . And just to round off the pictures of this visit, here's one of Thor responding to funny faces from his granny!

Posted by Dave and Val Taylor at 8:29 pm