More Diversions – Deliberate and Otherwise! – 2 Anderton and Beyond 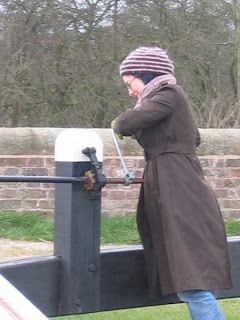 So – back from the Macclesfield Canal and on the Trent & Mersey again, this time heading northwest, and once again covering a stretch of canal where we had not been before. There had only been one small 'stop lock' on the Macclesfield, but soon there were quite a few more for Shireen to tackle – her choice entirely! She also did a bit of 'driving' – with a little 'help' from Thor. 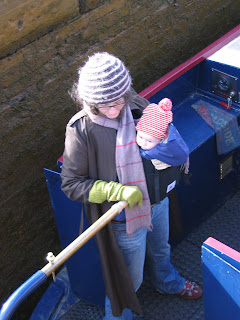 Adam came and joined us last Sunday for lunch at Wheelock and a little bit of cruising afterwards.
Then on down to Middlewich, where we turned off last April along the Middlewich branch of the Shropshire Union Canal towards the Llangollen Canal. 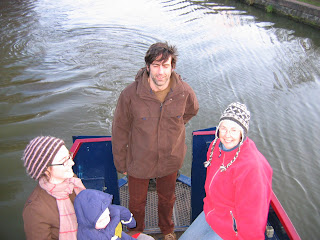 This time, we headed straight on towards Anderton and its famous Boat Lift. We only had time to stop and look at it last year, but now we rang ahead to book our passage down on Wednesday morning. 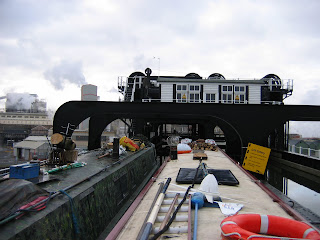 Here is 'Zindagi' next to the other boat that travelled down the lift with us. We went over the aqueduct to enter the 'caisson' (large tank filled with water), which was then lowered 50 feet to join the River Weaver. It is all powered by enormous hydraulic rams, but the weight of one caisson going down provides most of the power to raise the other one up from the river to the canal.
We started on the Weaver by going upstream and stopping for some shopping at Northwich, before trying to go right up to Winsford, the upper limit of navigation. When we reached the first lock, we were told that it and the next one up were closed for maintenance, but the BW men strongly recommended us to see what it was like downstream. 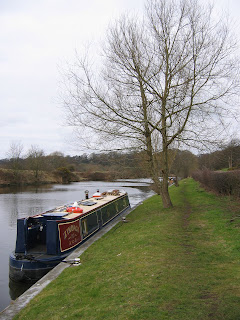 So we turned round and headed back past the lift and the enormous chemical works opposite it, very soon found ourselves entering a very different world and stopped for lunch in a peaceful spot.
Like on the Thames, all the locks are operated for boaters by lock keepers and on the Weaver they even phoned ahead to the next lock so that the keeper there had it ready for us when we arrived – what service! And what enormous locks!! 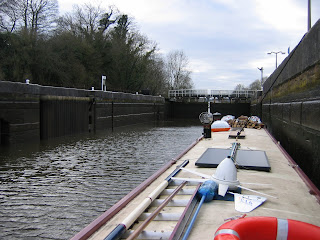 These were built in 1872 for coastal traffic coming inland and upstream from the Mersey and the Manchester Ship Canal to Anderton, Northwich and even Winsford, and all the swing bridges had to open for them, too. Sadly, the salt trade, which had been the original reason for the Anderton Lift, together with the chemical works on the Weaver itself, have all gone into decline and commercial coasters stopped using the Weaver Navigation in 1998. 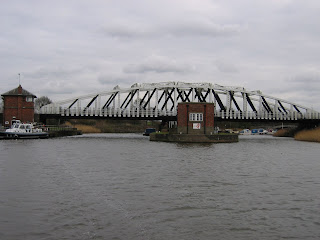 Now, as one BW lock keeper said to us, 'It's all for leisure and pleasure'. We went on downstream and found ourselves a quiet mooring, well away from civilisation. 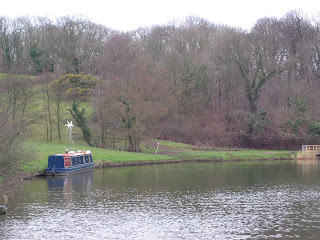 The next day, Thursday, we decided to follow the Weaver right down to its junction with the Ship Canal, and once again the river changed its character. As soon as we passed under Sutton Swing Bridge, we were back in the world of the chemical plant, with towers, lights and miles of pipework. 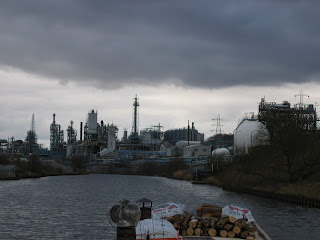 We turned round next to the lock leading to the Ship Canal and headed back to rural peace and quiet!
We only had two days on the Weaver, as we had booked to come up the Lift on Friday. In those two days, though, we had learned to appreciate this river, which probably is one of BW's best-kept secrets. 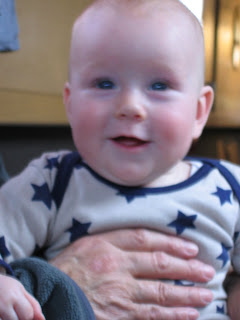 Back to the more familiar world of the canals, and we started our journey back towards Wheelock on the edge of Sandbach, where Shireen and Thor plan to leave us on Monday. We have really enjoyed having them with us and wonder how much he will have grown before we see them again!
Posted by Dave and Val Taylor at 10:15 pm

Thor's getting sea legs early!
I have beenwondering how you are doing in all the rough weather that we have had recently.

Thanks for your concern, Barbara! From watching the weather forecasts, it seems that you have had much worse weather than we have. Although we have had some wet days, and a couple of quite stormy ones, generally we have not fared too badly. We left the wind turbine lying flat for a couple of nights in the worst winds. Now we are likely to get 'wet, windy and wintry' weather for a few days, they tell us.