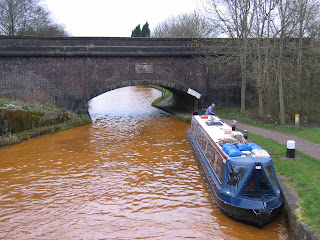 Having enjoyed the Cheshire countryside and the River Weaver with Shireen, we headed up the long-drawn-out series of locks to take us back to Kidsgrove, seeing the water turn gradually back to that familiar 'tomato soup' colour. We came under the aqueduct with the Macclesfield Canal going north over it (in this picture), up a couple more locks and then through Harecastle Tunnel again(quite fast this time, only 32 minutes!) and back to Stoke-on-Trent.

Why? The Caldon Canal, of course! We had intended to go there some weeks earlier, but the lock work was only due to finish on 14th March, so we even had to wait a couple more days on the outskirts of Stoke before heading up on the 15th. 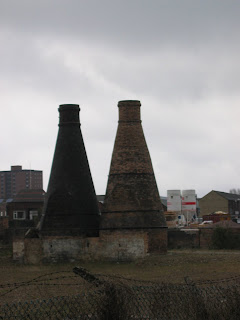 Polythene Pollution. All the canal guide books wax lyrical about the beauty of the Caldon Canal, but they seem to forget to tell you that you have to work your way out of Stoke first, before you come to the attractive bits! There are the old 'bottle' kilns from the remains of the pottery industry, but they mostly stand alone in sites that have been demolished for new housing developments. Should be nice when they are done, and some improvements are being made to the 'canalscape' alongside, too – very welcome! But we still had to contend with slow progress along the canal itself, for two reasons: firstly, the water level seemed very low, so the canal was shallow and that slowed us down. Secondly, there seemed to be even more than the usual amount of urban rubbish in the canal, including the dreaded polythene bags that attach themselves to the propellor. Pretty much the boater's equivalent of a flat tyre – you need to stop, open the weed hatch over the prop and get the obstruction out, whether it be weed, wire, rope or plastic. We had them all! 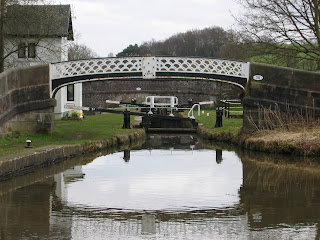 Before long, though, we shook off the decaying industry of the Potteries and found ourselves in rural Staffordshire. Quite a sudden change – another Caldon contrast!
Here is some fine metalwork on the little footbridge taking the towpath over to the Leek arm of the Caldon, while the 'main line' of the canal falls away down three locks to join the Churnet valley. The 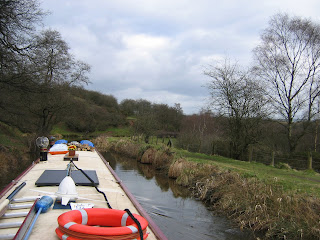 Leek arm then crosses the main line on an aqueduct and takes a pretty contour-hugging route around the side of the same valley and through a short tunnel before coming to an unceremonious stop where the canal and aqueduct have been filled in. The long walk in to Leek is past a large concrete works and industrial estate – a Leek Letdown! 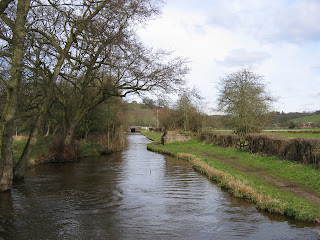 Remote and Roadless. The next day, we retraced our route back to the junction and went down the locks to follow the main line. Just after Cheddleton, as the road left the valley, we were joined by the Churnet Valley Railway and so rail, river and canal shared the remote wooded valley down to Consall Forge, where the Black Lion pub 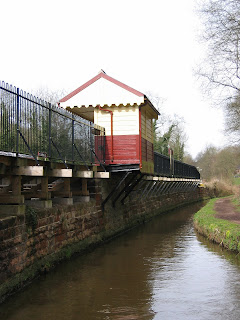 was once totally inaccessible by road, and the platform and Waiting Room of Consall Station hang cantilevered over a very narrow section of the canal.
As we went on down this lovely wooded valley, we realised that we were still a little early to see the Caldon at its best. Spring was only just beginning; the bluebells and wild garlic would not be out for a few weeks, and the trees were only just starting to show a hint of green. Lovely, nonetheless! 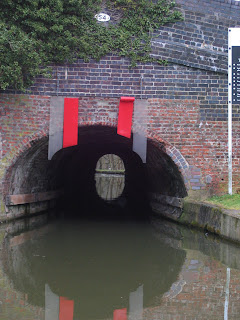 Froghall Frustration. At what is now the terminus of the canal, a short but very low tunnel takes the canal through to Froghall Basin and what used to be the beginning of the Uttoxeter Canal. 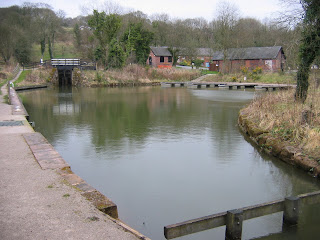 Well-meaning enthusiasts have paid for the restoration of the basin, which looks fine with its modern moorings. The only troubles are that hardly any boats can get through the tunnel and the Uttoxeter Canal goes no further! According to one British Waterways worker, there is some hope that the tunnel may be enlarged 'on the back of' local housing redevelopment on land above it. And canal restoration societies are founded on optimism and determination, so perhaps one day the canal will link right through to Uttoxeter again! 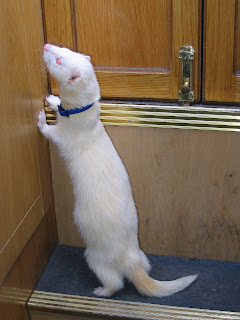 Adam and Rachel planned to visit us over the Easter Bank Holiday weekend, so we returned to Cheddleton to meet them on Friday for a meal at the Boat Inn and travel back down the valley with them. 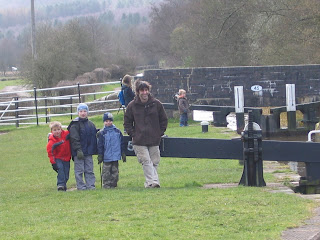 They picked up Jeremy as well, and he stayed for the whole weekend. Rachel's ferret Boo had a bit more exploring to do on board, Adam had some young helpers with one lock, and Rachel got really involved with working another one! And as it was the Bank 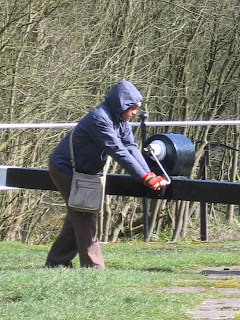 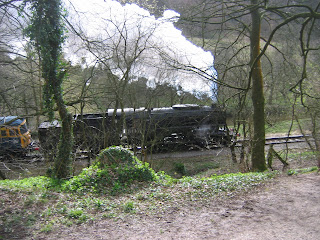 We took Adam and Rachel down the valley beyond Consall before they left us to walk back to the Boat Inn and resume their weekend in the Peak District. We went down to Froghall again to turn around, moored up opposite the 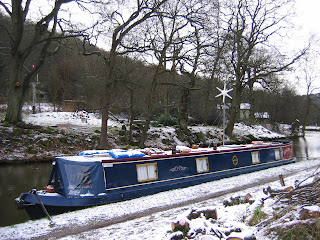 Black Lion at Consall and popped in for an evening meal in probably the remotest pub we are likely to visit!
Snow Surprise. We awoke next morning to an unexpected outlook! It didn't last very long, but made spring look like winter again as we headed back up through Cheddleton. By the time we reached the locks at Hazelhurst, there was no trace of it, and we moved on towards Stockton Brook. Adam and Rachel picked up Jeremy on Monday to get him to a train as they travelled home. 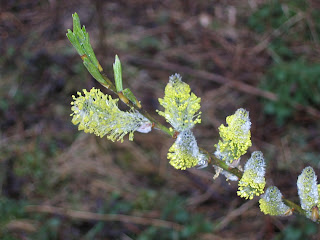 They all had to be back at work the next day, and Jeremy had to get ready for a trip to Chad by the end of the week. We just had to get back to Stoke to sort out two things: a couple of parcels to collect, and trying to get our old alternator repaired. One parcel was there, but we had to wait a couple of days for the other one. We ran into setbacks with trying to get the alternator repaired and so have still got to sort that one out. Meanwhile, moored near a lake on the edge of Stoke, there are signs that spring really IS on its way!
Posted by Dave and Val Taylor at 6:00 pm

How yuk that soup coloured water looks.
The railway 'hut' looks scarey hanging out over the canal like that.
Before I read the whole post I thought the ferret was a strang looking dog.
Glad you are still enjoying your trip, even in the snow.