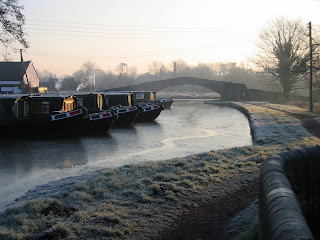 From Tixall Wide, our plan had been to head north up the Trent and Mersey Canal and branch off onto the Caldon Canal from Stoke on Trent. BUT – one or two other things have been happening since then and we have changed our plans – several times!

First, we knew that Shireen (with little Thor) wanted to join us for a week or two, so we planned to meet her in Stoke on Trent. Other plans meant that she could not join us until 26th February, so we thought we would take the opportunity to explore in the opposite direction and head south on part of the Trent & Mersey that we had not visited before. So we chugged out of the 'Staffs and Worcs' at Great Haywood (and past the Anglo Welsh boatyard, where our first canal adventures had started in 1976 and 1978) and turned right, in a sort of general Birmingham direction again! As you can see, the cold weather in mid-February meant that there was a little ice-breaking to be done. 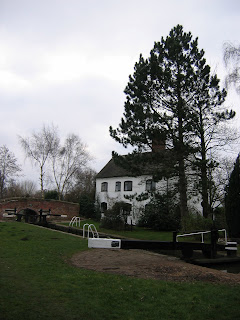 We travelled south east through pleasant countryside and through Rugeley with its massive power station dominating the landscape, turning right at Fradley Junction to join the Coventry Canal. All new territory for us. 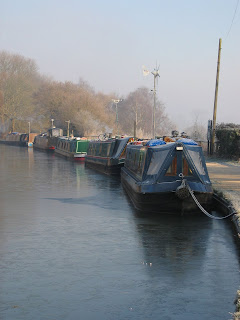 We soon found ourselves at the canalside village of Hopwas, near Lichfield. Once again, we were 'iced in', and just waited for other boats to crunch through before we moved anywhere – saves losing too much paint off the hull!
We decided to travel as far as Fazeley Junction before turning round and heading back towards Great Haywood again, and it was around this time that we had a phone call from Jackie, who said she would like to see us for a couple of days. We arranged to meet in Rugeley, subject to our being able to move. 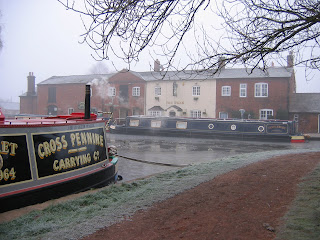 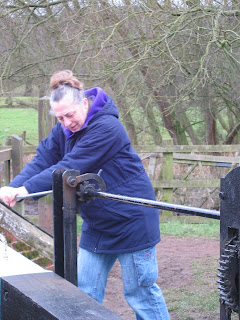 We made it OK through the ice, past the famous 'Swan' at Fradley Junction and back to Rugeley. Jackie had never been on a canal boat before, so everything was new to her, but she soon got involved, helping to work the locks with great enthusiasm. We took her for a 'there-and-back-again' trip up to Tixall Wide and back to Rugeley, where we turned round again, now really heading northwards to Stoke on Trent. The timing worked out fine for us to meet Shireen and Thor as planned, and we moved up to where the Caldon Canal branches off the Trent & Mersey. 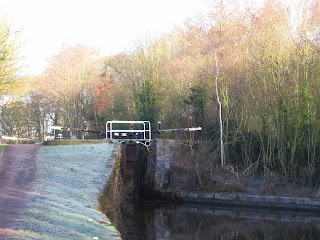 While I (Dave) was having a chat in the nearby marina next morning, someone mentioned that the Caldon Canal was still closed for winter maintenance. Sure enough, there in the list of 'stoppages', was one that would only be clear on March 14th! We had travelled north faster than we had originally thought and I had not re-checked the dates – oops! We needed some alternative plans . . .
Rather than go south again, we decided to head north and take a little trip up the Macclesfield Canal. This is part of our planned route to the Pennines, but we knew that we could not go very far straight away – more lock maintenance work! Travelling north up the Trent & Mersey meant getting through the Harecastle Tunnel (2926 yards long – about 50 minutes of tunnel) and we knew that we should give 48 hours notice. 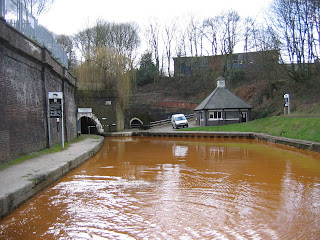 What we did not know for sure was whether we would need to 'strip down' Zindagi to minimum height to get through. The guide books (and British Waterways) said maximum 5'9" headroom, but another boater had told us some days earlier that he had got through OK with loads of stuff on his roof, well above 6 ft. Talking to the tunnel keeper, he said the best idea was for us to travel up to the tunnel and check against the height gauge, so we set off to get there as soon as possible.

When we arrived, we found that not only could Zindagi fit in easily, but also that we could travel through after about half an hour (not 48 hours later). The earthquake the night before meant that an inspection boat had needed to check all through the tunnel, and we could travel back with it as everything was OK. As you can see, the canal water in this area is the colour of weak tomato soup, due to local ironstone strata. 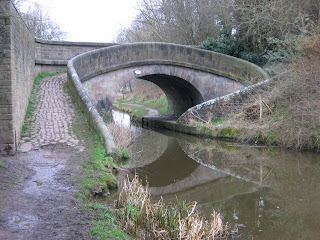 We had a couple of days on the Macclesfield, enjoying the not-so-wintery weather and the fine 'snake bridges', the local name for the ingenious 'turnover' bridges which enabled a towing horse to cross the canal when the towpath changed sides, but without disconnecting the rope.
But we still had more time, so what should we do with it? Checking through the guide books, we found that we should have time to travel on north on the Trent & Mersey and go down the famous Anderton Boat Lift to cruise on the River Weaver. When we came past it last April, we did not have time to go down on it, but said 'perhaps another time?' Here was our opportunity!
Posted by Dave and Val Taylor at 10:46 pm