The heading says it all! We have been 'hurrying' (as much we can at 4 mph maximum) since we left Blisworth on Tuesday 23rd, trying to get to London as soon as possible. Been making some quite good progress, too. 72 'lock-miles' in 2½ days averages out to over 28 per day, which represents about 7 hours' cruising. 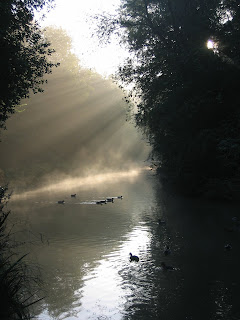 It can't really feel like a rush at that speed, and it has been interesting to see the Grand Union in different mood from when we came north in early August. The days and nights have been colder, and now the evenings are dark sooner, but many boaters we have met have commented how much they like the canals at this time of year. We agree!
As we climbed the Marsworth locks on Friday morning, we began hearing stories of a broken lock gate further south. Estimates varied as to how long it was going to take British Waterways (BW) to fix it. We heard 3 weeks to start with, then a BW man was quoted as having said one day! We plodded on our way, still trying to make good time but uncertain whether it was going to be a little pointless. As we came into Berkhamsted, the rumours began to firm up; there were BW notices on the lock gates saying that the canal was closed due to damage at Lock 60. Nothing about how long it would take to fix, though! Apparently one boater had phoned BW and been told 8 days – rather better than 3 weeks!
Our map showed us that 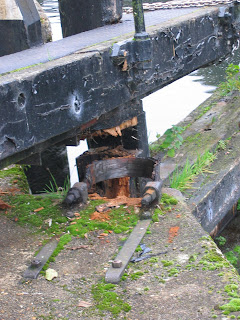 Lock 60 is rather out in the countryside and, though it would be nice to be there for a while, we thought it would be more practical to stop just in Berkhamsted, where we could do any necessary shopping and also get to a railway station. So we moored up and did the shopping, then Dave got out his folding bike and cycled down the towpath to check out the situation. Lock 60 is festooned with warning tape, and a closer look makes it obvious that the lock gate is completely unusable.
In the simple engineering of lock gates, the top of the 'heel post' (where it 'hinges' with the lock wall) is held back with a steel collar, well greased and adjusted with locknuts. You can see the collar in the picture, but unfortunately you can also see that the wood it is supposed to hold has rotted right through – one very heavy wooden lock gate hanging off its top hinge!
By this time, late on Friday afternoon, it was too late to phone BW for more information, and their website said the lock was 'closed until further notice'. So we decided to get on a train down to see Shireen for a day or two.
As I write this, then, Val has gone with Shireen to a routine antenatal appointment and I am sitting in the kitchen of their new maisonette in Stoke Newington! I have phoned BW, who say that the replacement lock gate should be fitted on Monday November 5th, so we may be able to travel on the 6th. We aim to head back to Berkhamsted on a train later today or tomorrow.
Posted by Dave and Val Taylor at 10:17 am

Sorry we missed you, we saw you above Common Moor Lock on Monday, we were heading towards Watford and moored just up from you but you were gone in the morning. Nice to meet fellow bloggers, perhaps again sometime. Dot

Thanks for the contact, Derek & Dot. Saw another boat there, but didn't see the name! Sure we have seen you elsewhere on our travels this year . . .