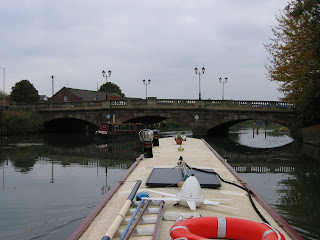 It was only when we had moored up in Northampton that we realised that we had just gone through our 1000th lock. Something of a milestone, perhaps?

We found the much-needed launderette, did the necessary 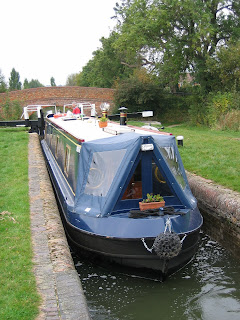 and started out on our way again. The washing machine engineers' area included the whole of Northamptonshire, so we could travel quite a little way down the Grand Union towards London before Tuesday, the earliest that we could expect to hear that the replacement motor had arrived. What had seemed like a fairly leisurely trip down to London was already beginning to get a bit tight!
So, after almost exactly 2 weeks on the River Nene, we set out under Northampton's South Bridge to rejoin the canal system and climb up the 17 locks and 5 miles of the Northampton Arm up to Gayton Junction on the Grand Union. Coming back to 'the system' always feels like coming home to familiar territory. 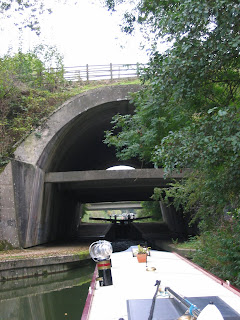 Better still, the narrow locks are much easier to work and close enough together to be able to start emptying the lock above whilst still filling the lock the boat is in. We were even faster up the hill than we were coming down a fortnight earlier – but still not FAST, as our 'record speed' was the staggering 6.55 lock-miles per hour! We usually add the locks and miles together, as it takes about as long to go through a lock as it does to travel a mile. Our overall average speed to date is 3.72 lock-miles per hour, so you can see that 6.55 l-m/hr really felt pretty quick!

This climb up to the 'main line' took us under the M1 and past some restored lift bridges and we moored overnight half a mile before Gayton Junction to avoid the worst of the noise from the nearby A43. 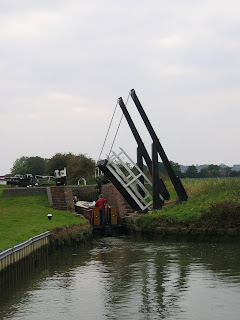 Then left at the junction to head towards London . . . BUT we were still waiting for the washing machine engineer, so we couldn't go too far. We settled on stopping at Blisworth, just north of one of the wettest tunnels. A much quieter village than Stoke Bruerne (south of the tunnel), but with a Post Office and general store – and still within Northamptonshire!
You may remember that we have had the occasional battle with our diesel-fired hob, as it has been sooting-up more and more frequently and we have had quite a protracted 'conversation' with the dealers about trying to resolve the problem. Well, at last some good news! The dealers agreed to replace the hob with a new one, but we still have to resolve whether the pipework was incorrectly installed and contributed to the failure. If so (and it seems likely), it will mean that we have to re-install the pipework to the proper specification. We have the new hob now, but have not connected it up to the old pipework until the questions are resolved.
More good news on the technical front. The receipt for our (now defunct) microwave finally arrived (no thanks to the postal strike, but with real thanks to Shireen), so we were able to take microwave and receipt on the bus in to Comet in Northampton, returning with a brand new replacement.
So, once the washing machine is fixed and the diesel hob questions completely resolved, our technical delays should be over and we shall be able to 'speed' down to London, hopefully arriving before our first grandchild does!
More technical problems, though! It seems that our useful link to the British Waterways map doesn't work as it should. We are not alone, other bloggers have found the same. We have e-mailed British Waterways about it and hope that they will be able to resolve it soon.
Posted by Dave and Val Taylor at 11:32 am

Still keeping up with you. Sorry ab out the washing machine though. It's not like yu can drop in to the neighbours!! Love Barbara

Funnily enough, here in Blisworth we have met up with some lovely folk at the Baptist chapel and had some good times with them – and one couple have kindly offered the use of their washing machine!