Down the Nene to Peterborough – and Back!

We could subtitle this chapter as 'The Mobile Washing Machine Repair' or 'Hunt the Launderette', as we are still without a functioning washing machine. As promised, the repair man came to us at Norton Junction on the 21st and identified the problem – or so he thought! He needed to order a new circuit board, and his firm would phone us when it was in. All we had to do was stay in the area they covered! We were planning to go down the Nene towards Peterborough, would that be OK? Yes, no problem, so off we set! 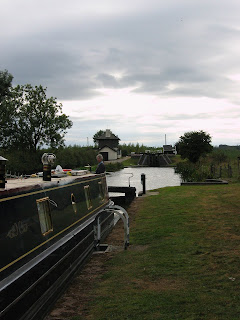 A couple of years ago, when our 'share' boat was based at Gayton (near Northampton), I (Dave) had wandered down the first few locks of the little 'Northampton Arm' of the Grand Union for my morning walk. Narrow locks – always my favourite and a welcome change from the wide ones on the Grand Union 'Main Line'. So now we were on our way down them and planning to sample the unknown territory of the River Nene!
Meanwhile, Jeremy had a few days' leave after a busy trip to Africa, and his birthday was imminent, so he decided to cycle down to Northampton (from Coventry!) to join us for a few days. Adam was going to be away, but Shireen had a couple of days to spare and arrived in Northampton on the same day.
So, four on board and on to the Nene! First of all, we discovered that its name is different depending on where you are. Spelt the same, but pronounced differently. On the western bit, until roughly the town of Thrapston, it is pronounced 'Nen' (to rhyme with 'hen'). Further east (and everywhere else it seems) it is pronounced 'Neen' (rhyming with 'green'). 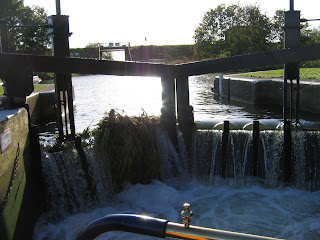 And then the locks are different. The top gates look much the same, though they often have excess water cascading over them. The bottom gates are replaced by a single steel guillotine gate on a high steel framework. These all used to be manually operated with a hand wheel (see Jeremy at work) but now most of these have been repl 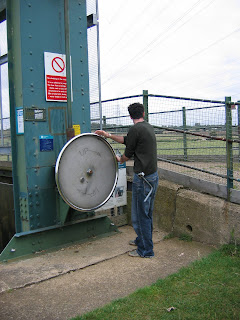 aced with electrical (but very slow) machinery.
And then there are all the mills along the river! Some 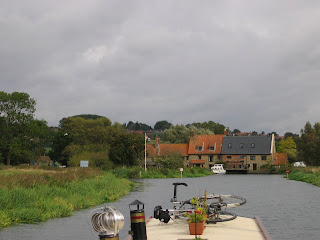 are modest, some are grand, but certainly most of them are interesting. Here is one at Doddington and another at Oundle. 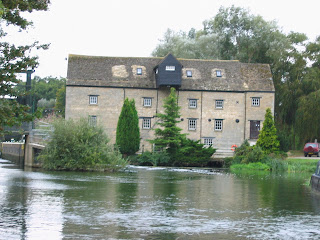 We could also do a series of pictures of the various church towers and spires – Northamptonshire is apparently known as the 'county of squires and spires'! – but we'll just give you the most well-known one, Fotheringay – more like a small cathedral! 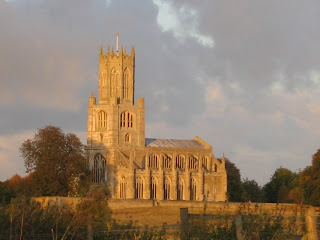 . . . and so on down to Peterborough, where we were able to moor right on the embankment – and found a launderette! We had a look at the completely different appearance of the Nene east of Peterborough, just a few hundred yards from our mooring: bleak and bare, just a flood water drain to the sea, not the lovely wooded river we had been enjoying. Quite an amazing change! Another branch can take you to the Rivers Great Ouse and Cam – maybe another time? 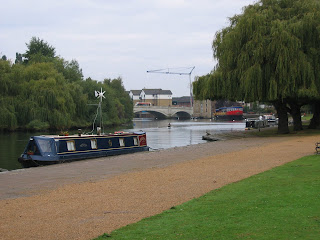 Time then to head back to Northampton, and hopefully to catch up with the elusive washing machine repair man! We had covered the last few miles down into Peterborough quite quickly in the pouring rain, so a welcome change in the weather meant that we could now take our time and enjoy the riverside scenery in autumn sunshine. At one of the locks, we even had to share the landing stage with the local Morris dancers! 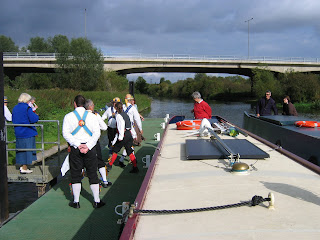 There are some really beautiful places along this river. We couldn't help making comparisons with the Rivers Thames, Wey, Lee and Stort. Yes, there are similarities, but each one is unique. We have enjoyed the old bridges, like the Nine Arches at Thrapston, and the long lines of poplars which feel almost like something out of Rick Stein's adventures in France. 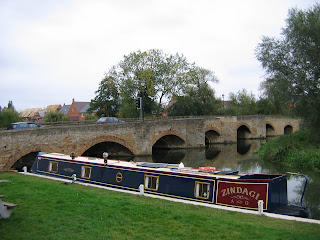 And then, suddenly, a phone call from the washing machine people! The needed circuit board had arrived, so could we make an appointment for Mark the engineer to call? It had just worked out well, so we chugged into Wellingborough on the Wednesday morning in time for our afternoon appointment. He came, fitted the new board, and found that the problem was elsewhere. We needed a new motor! So he phoned his office. 'No problem', his colleague said, 'we'll order one up and it should be here by Friday'. So, we said 'See you Friday' to Mark and went out into the countryside for a couple of days. Back early on the Friday, waiting for the phone call to say that the part was in – nothing! So we phoned later in the day and asked what had happened. 'Oh, there was no chance that those parts would arrive by today. It will be Tuesday now'. 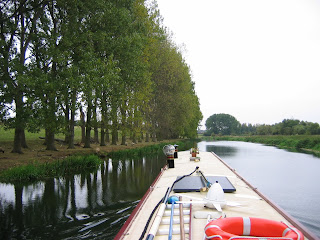 So all we could do was try to find a launderette again! We never expected the internet to be so useful for laundry! There were a couple in Northampton, so we could stop there on our way through and still stay in the firm's area for Tuesday. The saga continues . . .
Posted by Dave and Val Taylor at 11:20 am

Loved your account of tyour trip to Peterborough and back. We hope to go through to the Great Ouse in the Summer and I am trying to get a feel forteh rivers. The only iones I have narrowboated on are the Thames, Wey, Soar and the little boitof teh Trent on the Leicester ring so am looking forward to the change from teh Oxford and GU canals.