Down Deepcut, Dramas at Woodham and the Thames 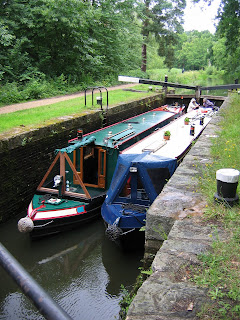 As we were working our way down the locks in the Deepcut and Brookwood flights, John (the Basingstoke Canal Ranger) was busy on his mobile phone. Then he came and told us that we might not be able to go down the Woodham flight the next day, and in fact might be 'trapped' on the Basingstoke canal for up to 3 weeks!
The reason? One of the lockgates on the Woodham flight was dangerously rotten and might collapse. If it did so while we were in the lock, there could be real danger of damage to the boat and personal injury. On health and safety grounds, they might have to close the canal with us still on it!
The next day, we started down the Goldsworth Locks, waiting for a phone call to tell us what had been decided at a site meeting at the damaged lockgate.
Eventually we had the news. They were going to let us down the locks, but we would have to get out of the boat while going through the lock, and it would be hauled through on ropes. In the event, it was very mundane, no drama, no danger. But we were the last boat down the flight and the canal has been closed since then.
It seems to sum up the negative side of this beautiful canal. The maintenance of locks seems to be on a 'fire-fighting' basis, lurching from crisis to crisis with insufficient finance, making poor use of the Rangers' time and efforts. What a pity – but at least we did see it all – really lovely! 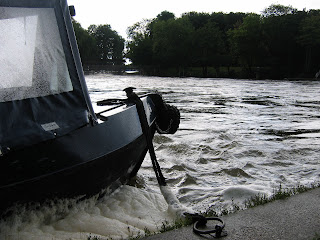 Back down onto the River Wey and down to the Thames at Shepperton again, to be faced with a swirling 'whirlpool' of water where the Wey joins the flow from the weir on the Thames. It looked like our fears might be true and we would have to wait there for the level and current to subside. Meanwhile, 'Zindagi' was surrounded by foam!
After a comfortable (but rather 'wavey') night, we phoned up Sunbury Lock (the next one downstream) and were pleasantly surprised to hear that there were NO warning boards out and we could go on downstream – so down we went, and found moorings just a few hundred yards above Teddington Lock, ready to start at 6.15 the next morning to catch the high spring tide. 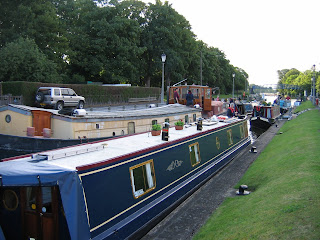 So here we all are in the lock early on Thursday. If you look carefully you can see that lifejackets are in evidence – these and an anchor are essentials for the tidal Thames. Six narrowboats and one big Dutch barge – and still plenty of spare space in this enormous lock. Quite unintentionally, we found ourselves at the front of the lock with the Dutch barge, and so were the first out of it and therefore 'leading the convoy' down this tidal reach of the Thames to Brentford Lock.

After the fairly strong flows on the river above Teddington, the water below was like a millpond with very little movement. It was just about high tide, but the ebb was due to start soon! 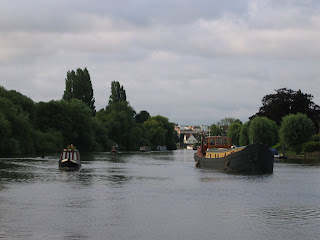 Very odd, being the front boat of this small flotilla chugging slowly down a quiet and empty Thames at this early hour!
It took about an hour to travel down to Brentford, and soon the still waters began to flow faster as the ebb tide started. As we had not been this way before and were at the front of the convoy, we had some uncertain moments trying to spot the entrance to the Grand Union Canal at Brentford, as it slants back almost invisibly on the left. When we had seen it, we had to cut across the ever-increasing stream and back against the current to enter the channel. Perhaps a little scary, but no real problem!
So, back on the British Waterways (BW) canals after a long time on the Thames and other waterways. We had left BW territory at Oxford on the 18th of May – seven weeks ago!