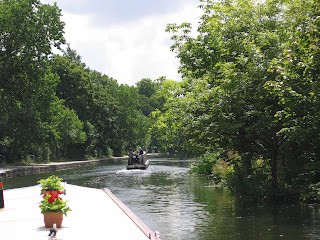 You just would not believe that this is Hackney, east London! On our way out towards the Lee and Stort Navigations, but still very much in London. 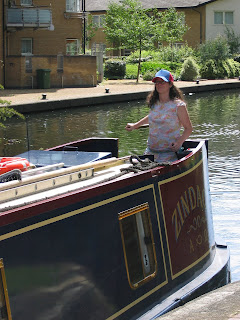 And here is Shireen, complete with 'bump', demonstrating her skills at the helm of 'Zindagi'. She travelled some of the way up the River Lee with us and then took a train back to Paddington.
Unfortunately, she saw the rather bleaker bit of the Lee and missed the beauty to be found further north . . . 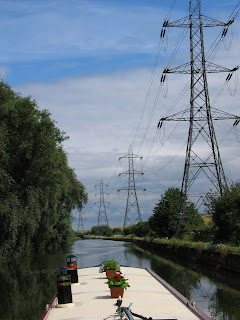 . . . and this is one of the better bits! The 'canalised' river reaches almost due north from East London, with the high embankments of endless reservoirs on one side and the ever-present lines of pylons marching alongside. Even the constant presence of the railway and various roads seemed pleasant by comparison! 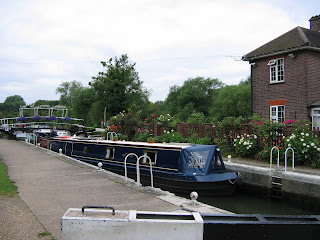 And then, round about Enfield and Waltham Abbey, it all began to change, slowly at first, until we found ourselves in much more pleasant surroundings, like here at Carthagena Lock near Broxbourne – they even had hanging baskets on the lock footbridge! 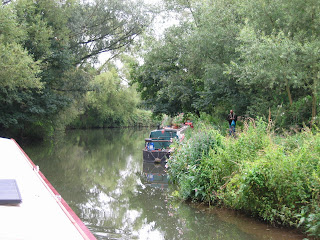 Soon after that, we turned onto the River Stort and the scenery changed instantaneously, as you can see yourself here. Quiet, tree-lined, almost secret in some places, passing through nature reserves and small towns. 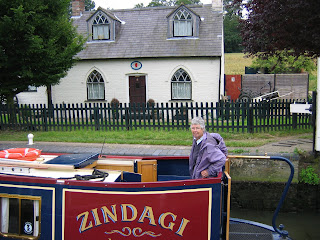 Unusual lock cottages, some of them with the coat of arms of George Duckett, who made the river navigable in the late 1700s . . . 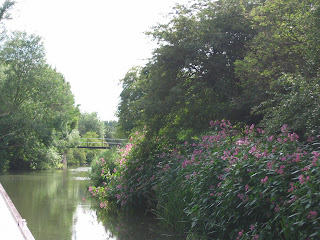 . . . and some sections awash with colour from the exotic Himalayan Balsam which has spread along the banks.

From the limited view of photo I would say that Shireen looks just like a young Val. Glad you are enjoying this part of the world.
If you know your plans for the rest of your time in the area you can always E-mail as I check several times a day then I could telephone you on your mobile.

Val, greetings from the USA...I came to your blog via Barbara's blog.

What an interesting undertaking you are on....I've enjoyed going through the locks with you and the beautiful scenery.....Betty @ Country Charm....