A Month on the Llangollen

Our first trip on the Llangollen Canal was just 10 days or so after we started our canal travels back in 2007.  The boat still felt new, we were still getting used to it, and David & Mary had joined us for the only time they could make it – Easter school holiday week!  We avoided the worst of the holiday crowds by starting a few days later than they did, and we still made it up to Llangollen and back in a week!

No such pressure of time on this occasion, but when were we going?  Only in August – school holidays again! 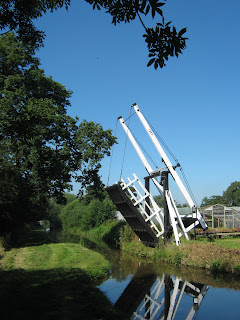 The Llangollen, of course, is known for its distinctive style of lift bridge.  Here is one near Wrenbury which we didn't need to operate – it is left permanently open. 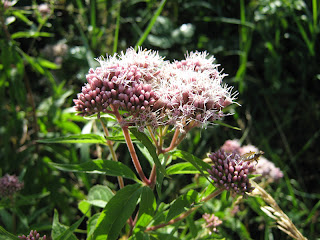 The hedgerows were responding to warm sunshine, at last!  Hemp Agrimony near Wrenbury. 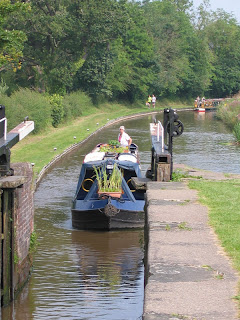 Val bringing Zindagi into Quoisley Lock, on the Cheshire/Shropshire border.  This canal was originally known as the Ellesmere Canal and runs through several miles of Cheshire and Shropshire countryside before it get anywhere near Wales! 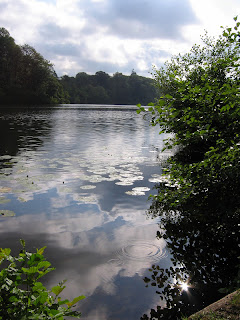 Near Ellesmere, we moored right next to Blake Mere.  This was very nearly the view out of our bedroom window! 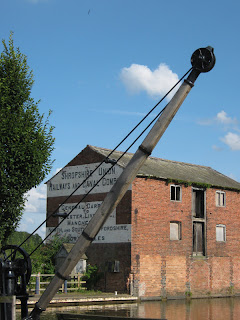 Down the short arm to Ellesmere itself, the stark emptiness of the wharf is relieved by the old crane and canal warehouse – neither in use for anything as far as we could see! 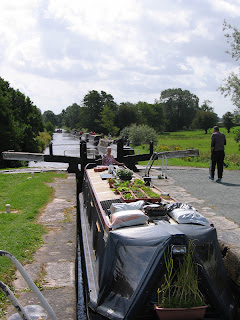 New Marton Locks, just about the only significant congestion point we have found on the canal.  This time, we only had to wait about half an hour to get into the lock – but look at the queue of boats behind us – I make it about 7 or 8! 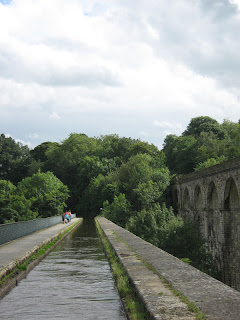 Then, an apparently sudden transition to the Welsh Hills as we crossed Chirk Aqueduct next to the railway viaduct.  This aqueduct would probably be much more famous if it wasn't for the other one just 3½ miles away! 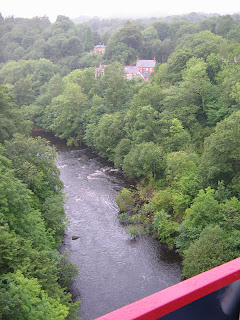 And here it is – the jaw-dropping view, looking straight down over the side of Zindagi's stern deck, to the River Dee, some 120 feet below the Pontcysyllte aqueduct. 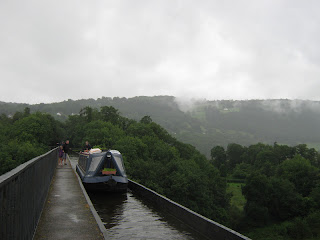 See what we mean?  The nearest thing to flying in a narrowboat!  And, amazingly, we had come up no more locks since New Marton in Shropshire.  Perhaps not so much climbing into the Welsh Hills as soaring over the Welsh valleys! 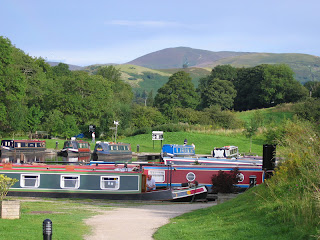 We arrived in Llangollen 8 days after we joined the canal, and decided to stay 2 nights in the mooring basin.  A moderate charge for a quiet location, with electrical hook-up included. 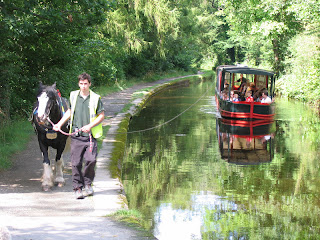 The canal from Trevor to Llangollen was originally designed only as a feeder, but was made navigable this far.  Only the shallow-bottomed tourist trip boat can go any further . . . 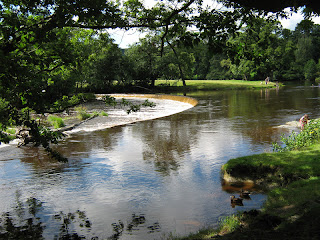 . . . but we walked up to Horseshoe Falls, where the feeder comes off the River Dee, not only keeping the canal supplied but also feeding Hurleston reservoir at the junction with the Shropshire Union. 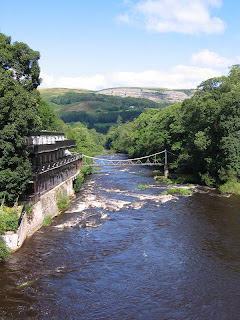 Here is the Chain Bridge Hotel at Berwyn, perched on the banks of the Dee with the canal feeder hidden behind it and the old suspension ('chain') bridge still standing (but not in use!) 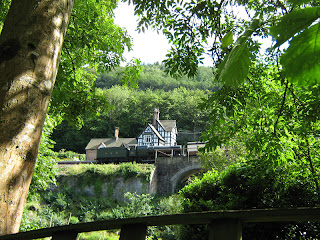 We walked over the road bridge and up the other side of the valley to little Berwyn station, to catch the Llangollen Railway back. 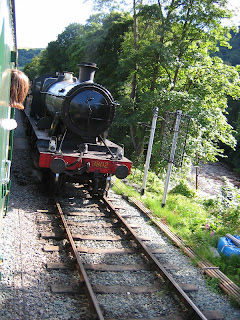 Our train was pulled by a historic diesel, but we met a steam engine coming the other way, 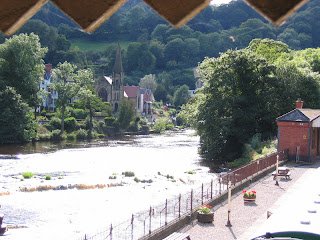 back to Llangollen station. 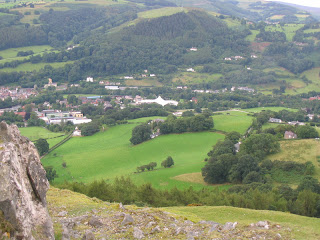 Castell Dinas Brân towers over Llangollen and is the remains of a medieval fort, as well as the site of an ancient Iron Age hill fort.  A good morning climb for Dave, rewarded with stunning views!  The canal basin is just to the right of the large white Eisteddfod marquee, but not really visible from up here! 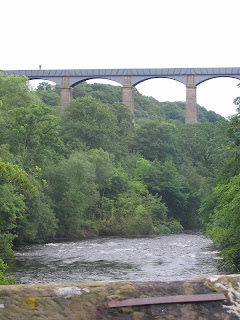 As we made our way back, here is a different view of the Pontcysllte aqueduct, from the bridge over the Dee below.  Yes, that IS someone walking over on the footpath! 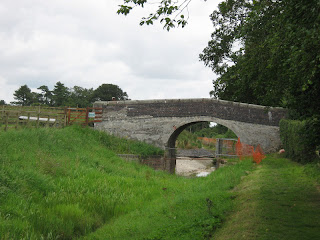 Just a few miles from the aqueduct, we turned off at Frankton Junction to spend a few days on the Montgomery Canal.  Progress on restoration seems to be slow, but recently lottery funding has been going elsewhere, apparently! 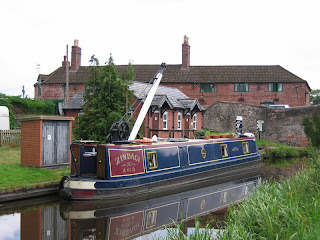 Apart from simply enjoying another visit to the 'Monty', we had other motives for coming here!  The Navigation Inn (a former canal warehouse in Maesbury Marsh) was the venue we had chosen for a family meal to celebrate our 40 years of marriage, 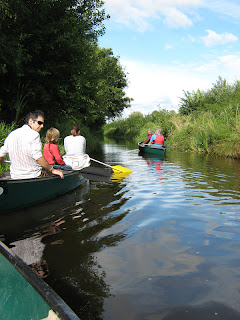 closely followed by an afternoon's canoeing for the whole family . . . 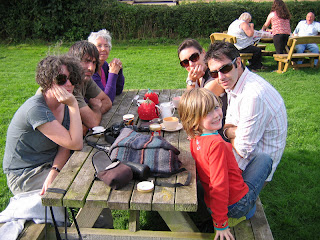 . . . and not forgetting a cuppa and ice cream afterwards!  Thanks to Adam for hosting us all.  Another reason for choosing Maesbury Marsh – Shrewsbury is not very far away! 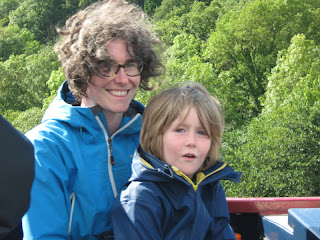 Shireen and Thor joined us for a few days afloat – over the Pontcysllte aqueduct again!

We left the Llangollen Canal on the 8th of September, exactly a month after we joined it.  A most enjoyable month – now to head further south!
Posted by Dave and Val Taylor at 4:45 pm