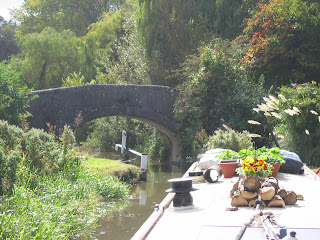 We had just about a week after leaving Trevor and Christine at Lower Heyford until Colin and Jan (from Lapford) were due to come and join us on 6th October. Did we have time to get on the Thames for a few days and, if so, should we go upstream or down?

Whichever we did, we would need to head south to Oxford before that decision was urgent. The canal was quite quiet, with very few moving boats despite the amazing weather for late September. Here is the bridge and old stoplock at Shipton-on-Cherwell, and it almost looks like high summer! By the way, you can also see the pansies and the 'veg garden' on the roof, both of which have flourished since we planted them only a few weeks ago.

The next day, the decision was made – we would go upstream and see how far we would get in the time available. 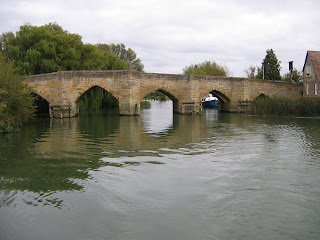 The Upper Thames was just as we remembered it from 2007 – remote, winding and seemingly as far away from civilisation as possible. Miles of flat fields, trees sometimes lining the river and then the flurry of human activity as bridges brought with them pubs, cars, people and usually a little concentration of moored boats. Not many were moving – we had the river pretty much to ourselves!
Here is one of the oldest (13th Century) bridges on the river, ironically at Newbridge!
Without hurrying, we carried on up as far as Rushey Lock that day and, just as in May 2007, we were treated to spectacular sunset effects. 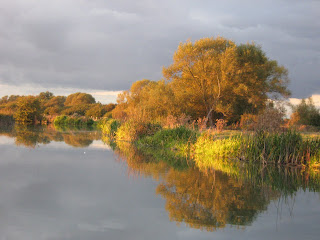 This time, though, it was the autumn leaves on the trees which were painted in surreal colours by the setting sun. Yes, these are the actual colours we could see – hardly believable!

The next day, 1st of October, we reckoned that we might be able to get up to the limit of navigation at Inglesham near Lechlade, and that's how it turned out. We made our way up the remaining few locks and had lunch near Ha'Penny Bridge at Lechlade. 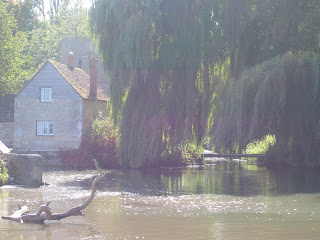 A quick visit to the shops and then we went on the extra half mile or so to the bridge and Round House, where we needed to turn around – that big branch didn't help, but we turned round OK! There are plans to restore the Thames and Severn Canal which used to join the Thames at this point, and hopefully will do again. Have a look at the website of the Cotswold Canal Trust for more information, photos, maps, etc.

And then back downstream again! Again, the river was almost deserted and the lock-keepers shared their surprise that more boaters were not afloat and enjoying the weather. One of them has been at the same remote lock for more than 40 years and is an avid wildlife watcher. We could have stayed and talked about otters for hours! 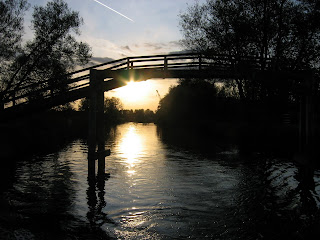 On the way back to Rushey Lock (again) for the night, we had the late afternoon sun directly behind us, giving us this 'sunset' picture under 'Old Man's Bridge' near Radcot, with cranes working near Radcot Lock in the background. 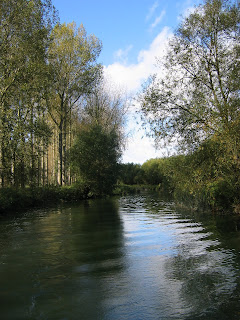 Next day, we continued our return journey to Oxford, passing through some amazing twists and turns of the river, including this section which is also lined with poplar trees – we were starting to get showered with falling leaves. 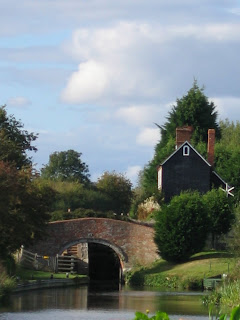 And so, back onto the Oxford Canal again. We had made such good time from the Thames that we reckoned we could go up to Banbury again before coming back to Aynho to meet Colin and Jan on the 6th. The weather stayed good most of the time, and certainly as we came to Somerton Deep Lock again. It is deep (12 feet change of level) but it is also very attractive, with the quaint dummy window painted on the end gable wall of the cottage, the simple old bridge and even its own little landing stage below the lock on the right. There is no road to the cottage!
Getting back to Banbury for some shopping was no problem, so we were heading back to Aynho again in good time.
Posted by Dave and Val Taylor at 9:20 pm