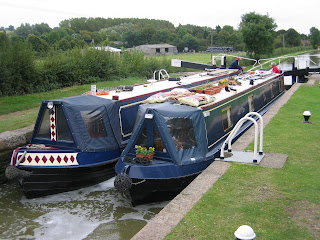 Back to 'Zindagi' and Blisworth at the end of August, a couple of weeks there to give Val a bit more recovery time and get a few things sorted out (including a large order from Switzerland for the online garden tools business) and then it was time to start out on our travels again.

We were heading for the Kennet and Avon Canal, running from the Thames at Reading to Bristol on the Avon. The 'obvious' way would have been to go south down the Grand Union to the Thames at Brentford in London, then upstream to Reading and turn off there, but we did some calculations and worked out that this apparently shorter route was actually longer in 'lock-miles' than the alternative of travelling northwestwards via Norton Junction, Braunston and Napton, then down the Oxford Canal to join the Thames and downstream to Reading. 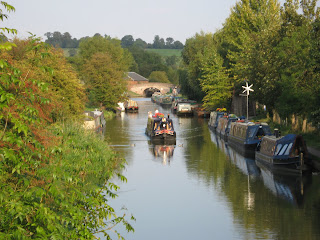 Besides, this southern part of the Oxford Canal is one of our favourite canals, with its narrow locks, contour-hugging route and quiet countryside. It was the second canal we travelled on, back in the late 1970s, and we have been back since, on our 'share-syndicate' boat in 2005 and then on 'Zindagi' in the early part of our travels in 2007.
So, in order to travel south and west, we needed to start off going northwest, and mid-September found us going up the Whilton/Buckby flight alongside the A5, the M1 and the railway (west coast main line) and then escaping that hubbub as we headed towards the Braunston Tunnel. We emerged into the slightly surreal 'canal world' of Braunston. (You can see our wind turbine on the roof of 'Zindagi'.) Val's mobility was improving well and she managed the walk up the hill to the shop and the apparently separate and quiet world of Braunston village itself. 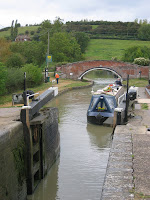 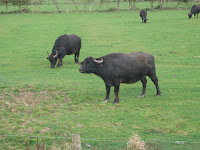 Moving on after a few days there, we came to Napton and the start of the narrow locks of the Oxford Canal – a welcome return! More surprising was to find ourselves apparently transported back to India as there were water buffalo in the fields next to some of the locks. 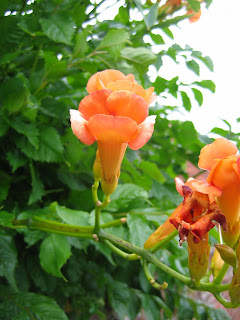 It was getting towards the end of September by now, but the weather was still very mild and there were flowers to prove it, like this beautiful Campsis radicans at Claydon locks as we started the gradual descent towards Oxford. 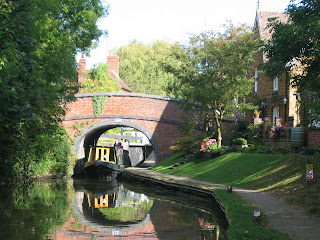 We probably shared a picture of Cropredy with you when we travelled down this way in 2007, but we couldn't resist taking a few more as we were moored up and watching another boat coming out of the lock behind us. Here's one of them. You can probably appreciate a little more of why we like this canal so much. 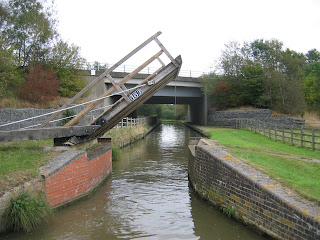 On past Banbury, we began to realise that we had forgotten that the next part of the canal is a little different from the part north of Banbury. The story is that the canal builders started running short of cash as they dug southwards, and the double gates at the bottom of each lock above Banbury disappear in favour of single gates 'top and bottom'. Wooden lift bridges start appearing (only one seen north of Banbury), but stone and brick bridges are often there at the foot of a lock. Here's a recently restored lift bridge, contrasting with the M40 bridge behind it. 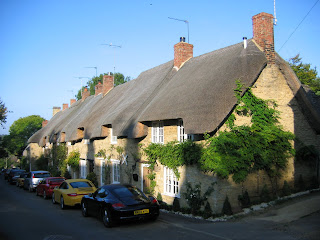 And picturesque villages still hide near the canal. Some parts of both Upper and Lower Heyford have a timeless quality – apart from the cars and TV aerials, Upper Heyford's High Street seems to have remained unchanged for centuries.
There's more to come – hopefully very soon – as we update the story for you . . .
Posted by Dave and Val Taylor at 9:50 pm