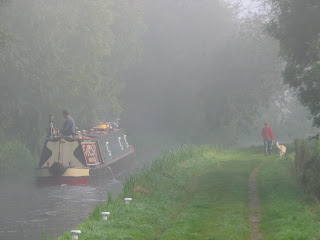 On our way up from Devon to Shrewsbury, we spent a very enjoyable day with Jonny and Sue, who were with us last year when we went up to Leicester and back. Their Somerset home was sort of on our way, so we made sure that Adam could do without the car for another day and stayed the night with them. Great to catch up a bit!

While we had been away, Adam and Rachel had been able to enjoy a weekend on the boat themselves, taking it down 3 locks and 2½ miles (as far as you can go at present), back almost as far as the junction with the Llangollen Canal and then down to Queen's Head again. So, there was 'Zindagi', in exactly the same spot, pointing the same way, but Adam and Rachel had already explored the remaining stretch of the Montgomery Canal. Now it was our turn . . . 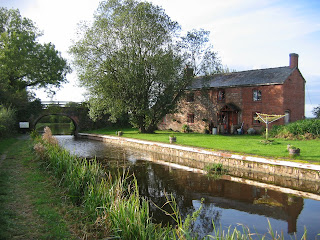 The Montgomery Canal is being actively restored, but of course it is a long and costly process. The limit of navigation is currently at Gronwyn Wharf. If you look carefully, you may be able to see that the canal is fenced off under the bridge, though the towpath continues. It runs nearly all the way to Newtown, Powys, 32½ miles from Frankton Junction. The hope is that the whole length of the 'Monty' will eventually be re-opened, but there is a lot of very basic work to be done, as you can see in the picture of the canal bed a little further on from Gronwyn Bridge. Further on again, the canal was very overgrown – even more to be done! 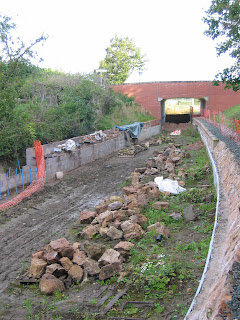 On our way back up the Frankton locks, we found that there were 10 boats booked in to go up them and none to come down, so there was a bit of delay and Colin the lock-keeper was kept very busy. Back on the Llangollen Canal again, and finding our travel rather faster than on the way up, as the flow down from the River Dee makes a substantial difference.
We had originally expected to simply turn south on the Shropshire Union as soon as we left the Llangollen, but now we planned a diversion back to Middlewich to get some work done on the boat. You may remember our occasional battles with our diesel-fired cooker hob. As we have talked with the team at Middlewich Narrowboats since we called in there in April 2007, we knew that they had the same hobs and ovens installed on their hire boats and that they had experienced some similar problems with the hobs sooting up. Recently, though, they had found a solution – running the hobs and ovens on kerosene instead of marine (red) diesel. Their experience (with 18 boats) showed that there was no sooting-up and the units burned much cleaner – and hotter. So we decided to have a kerosene tank fitted and arranged to be back there on Wednesday 8th October to get things started. 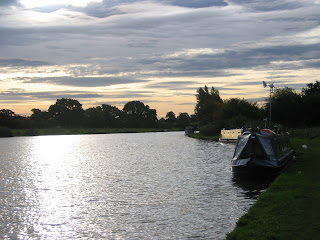 Dave the tank maker came and had a look. Yes, he could make a tank to fit in a space next to the diesel tank, but he certainly couldn't find time to fit it. So Middlewich's father and son team, Dave and Joe, would be able to fit it in their own time, as Adam (the boss) simply couldn't spare any of their work time. To cut the story down a bit, the tank was ready by Friday but couldn't be fitted until Monday.

We had a few days to wait, so we headed out northwards on the Trent & Mersey to some 'flashes', where areas of land next to the canal have subsided and made wide lakes. A popular spot for water birds (including several hundred Canada Geese) and apparently also for many local boat owners who often pop out there for the weekend.

We were back in Middlewich on Sunday, ready for Dave (of Middlewich Narrowboats) to fit the tank the next day. He did a very neat job and initial impressions of running the hob on kerosene are certainly favourable – no smoke at all and very little smell, so hopefully no soot either.

So we were able to leave late on Monday afternoon, retracing our route back along the Middlewich arm towards the main line of the 'Shroppie' – heading south at last!

Lots to digest since last visit.

Do hope that Val canhave the right treatment for knees. Folks we have known with knee problems have really benefitted from new knee joints.