For the last few weeks, we have been steadily plodding along, gradually getting through the heart of the Midlands. The canals in winter are different from summer time – for one thing, we seem to be almost the only ones who are moving! In the summer, we often passed several boats each hour; now we sometimes go for several days without meeting another moving boat. 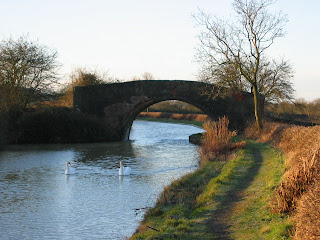 We had originally expected to moor up for a few months in the winter, but we are pleased that we didn't do that after all. Keeping on moving is much more fun, though of course we are not covering so much distance, as the days are shorter and sometimes we just 'stay put' if the weather is bad.

In our last blog 'posting', we were in Blisworth for a few days. Good friendships developing there – we expect to be back again! Then on up the Grand Union to Braunston again, (a very familiar stretch) and along a short length of canal that we haven't been on for a couple of years, joining up with where we came down in late April last year. 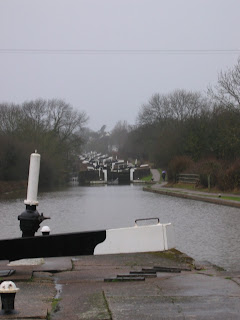 Once again, we met up with Jeremy on his 'home turf' as we spent a few days in Leamington Spa, enjoying a birthday meal for Val in the 'Delhi Palace' (really good Punjabi food – home from home!). And again, he helped us work through the towering Hatton flight of 21 locks, though we made more progress before he arrived than any of us had expected. This picture shows you just about half a dozen of the higher locks. As the canal was virtually deserted, we 'broke the rules' and moored up between the top two locks to enjoy a meal in the little café there.

As we were moving gradually closer to Birmingham, we phoned Noona, the daughter of our friends in Punjab, who is studying there. When would it be good to meet her for a day together? With a date agreed, we found we had a few days to spare, so (once again) we took a short trip down part of the 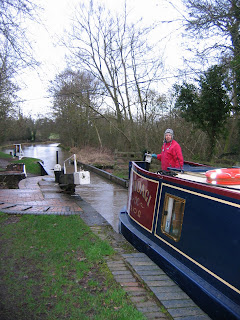 Stratford-on-Avon Canal. Oh, the luxury of a narrow canal, with easier locks and just a cosier, remoter 'feel'! Even some interesting oddities, like a tiny aqueduct leading into a lock. You can just see it in the photo. (Do you like Val's new winter hat?) 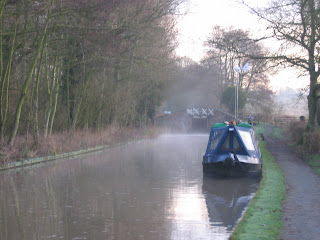 Yes, sometimes it's cold outside, but isn't it beautiful?

Back to the Grand Union again, and a bit of a shock to the system as we came to the next flight of locks at Knowle 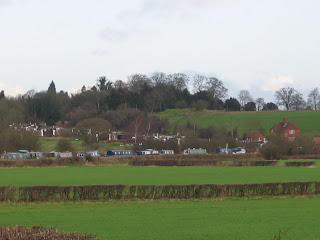 – big, wide locks (enlarged in the 1930s) climbing up the hill and exposed to vicious south-westerly winds. We had a few bumps as we battled the breeze to go from lock to lock. Well, they say that boating is a contact sport! 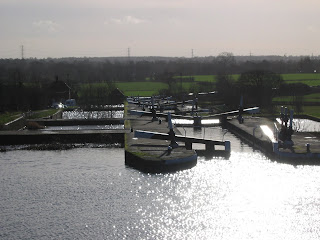 And so to Birmingham! The grand scheme to widen all the locks 70 years ago came to an end before it reached the Birmingham locks, so we found ourselves winding through the hidden back ways of the city in narrow locks (and one short but 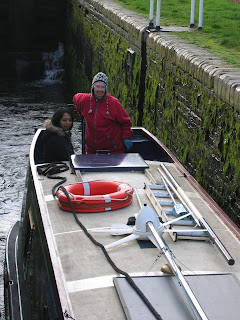 VERY narrow tunnel). Noona joined us for her first experience of canal boating, and she seemed to enjoy her unusual day out, even joining in with operating the locks once she had got the idea of how they worked. 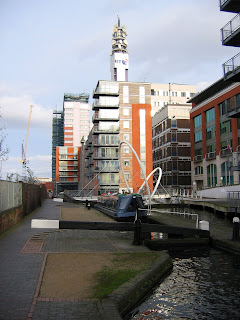 Birmingham canals are full of contrasts. It has always been the heart of the British canal system, and they say that it has more miles of canal than Venice. Noona had seen the canal in the city centre, and knew she would recognise where she was when she came to 'the bit that looks like Venice' – so we went there! Right in the heart of the city, with a little tunnel under Broad Street, the International Conference Centre, the National Indoor Arena and the Sea 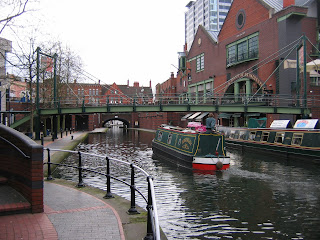 Life Centre, not to mention the very continental-style canalside bistros. Despite the cold weather, it was still pretty busy! 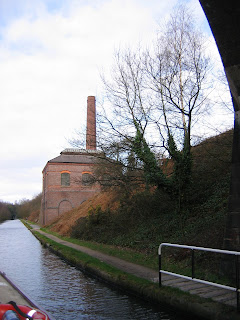 And then, just a few miles along the 'New Main Line', an old brick pumping station, only just rescued from demolition, fairly recently. We also took the opportunity to wander along some of the side loops that were left when the Main Line was straightened in the 1820s and 1830s. 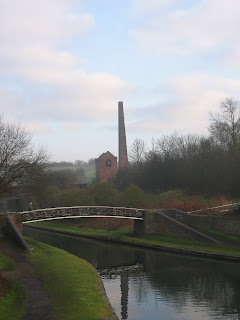 Our planned route was to go south-west to join the 'Staffs & Worcs' canal, and that meant going through the Netherton Tunnel, nearly 2 miles long but high, wide and spacious with towpaths both sides. Straight through in exactly half an hour, and we were out of Birmingham and officially in the Black Country – we are told there is a BIG difference between the two! 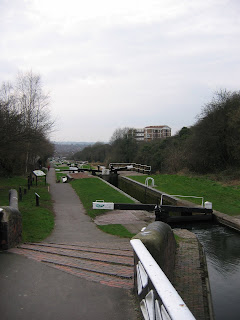 Our journey has taken us DOWN through Dudley and Stourbridge. We had not realised how high Birmingham really is! Eight locks at Black Delph brought us down 85 feet on Tuesday, and another 16 dropped us a further 145 feet into and through the old glass working area around 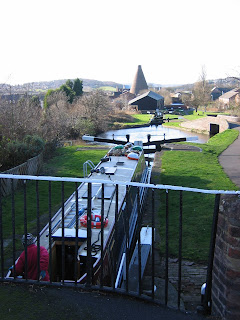 Stourbridge on Wednesday. You can see the famous 'cone' of the Redhouse Glassworks right alongside the canal.
We planned to just spend one day in Stourbridge, but wondered whether our visit might be extended when we found that a tree had fallen across the canal in this morning's high winds. Dave phoned British Waterways and it was cleared by mid-afternoon, when we wanted to leave. Good old BW!
We are now back out in the countryside again, with the canal following the River Stour down to the 'Staffs and Worcs'. This is going to be a trip down memory lane, as this was the first canal we cruised on, back in 1976!
Posted by Dave and Val Taylor at 6:38 pm

I liked your first photo of the bridge. The contrast of colours is so good.
I am not surprised you don't see many boats moving in the Winter!!