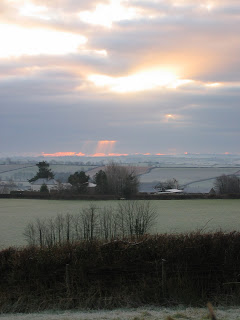 After two weeks in Lapford, it seemed a little strange to leave our bungalow again. Despite 'camping' there with minimum furniture, it somehow began to feel like home again, and it was tempting to try and get stuck in to too many tasks. There were things that needed to be done before handing over to Steve and Lin (our new tenants), but there were plenty more that we just did not have time to tackle – just as well we had a deadline, or we might be there still! Here's a little reminder of the lovely light of a December morning over Lapford School. 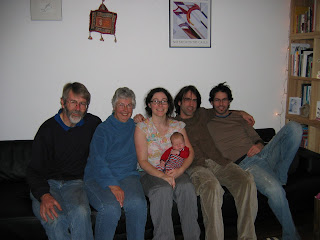 So, back to 'Zindagi', safe and secure at the moorings in Cheshunt on the River Lee, northeast of London, then in to Stoke Newington the next day to meet Adam at Shireen and Frankie's home and give him back our car – and to enjoy seeing Shireen and the baby again, of course! Still no name at that stage, but we shall reveal it below! Jeremy was also in London and came over, so we had a big family photo on the massive sofa! Then back on the train to Cheshunt. 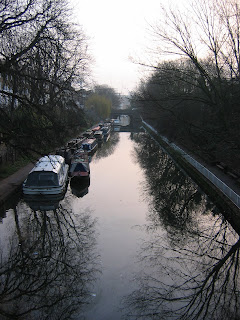 When we looked out of the boat the next morning, the canal was covered with ice! Not too thick, so we thought we should be able to get moving. Fortunately, some other boats had been moving, so we didn't need to do all the ice-breaking ourselves. Southwards to London!
Once again we found ourselves really enjoying our route through London and this time we almost had the canal to ourselves – very few other boats on the move, though the mooring sites were full – 'double parked' in many cases – as here in Islington, where we stopped to do a little shopping. The light had that crisp, winter clarity but there was no ice as we chugged through. 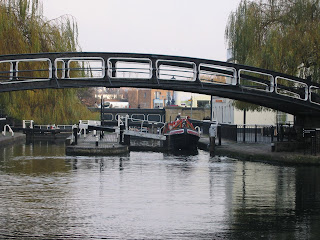 Here are the locks at Camden – rather different from when we came through on a Sunday in the summer, though there were still quite a few people around. 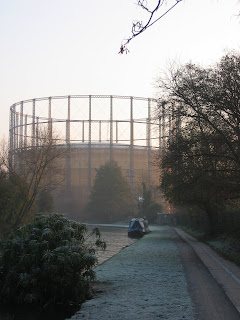 Then out west again – not stopping in Paddington this time – to a strangely picturesque mooring near the gasometers by Kensal Green cemetery. Ice on the canal the next morning, and quite thick; we were glad of our central heating and woodburning stove and waited to see whether other boats would be on the move. Sure enough, some were, so we moved on a little further.
The next morning, starting the engine, Dave saw a warning light to say that the alternator was not working properly. Where could we find anyone to fix it on the Friday before the Christmas break? Boatyards were closed or closing, no electrical engineers around, certainly! Fortunately, we were heading towards 'Little India' – Southall – and if anyone would be able to fix it for us, that was a good place to try. A little cycling around eventually revealed an auto electrical dealer who would do it for us (Punjabi – of course!) and we were off again on the Sunday! 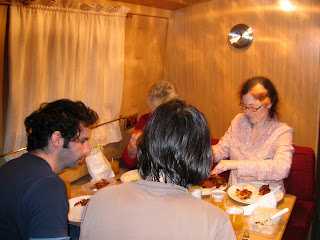 Our main reason for travelling at this time of year was to avoid the 'stoppages' (canal closures for maintenance), some of which were due to start on 7th January. The most northern of these on the Grand Union were at Stoke Bruerne, several miles (and locks) north of Milton Keynes, so we decided to keep going in case we HAD to stop again for bad weather. So it was that Jeremy joined us at Rickmansworth and travelled on with us to Berkhamsted, where Adam drove to meet us and Shireen brought little Thor for his first trip on the train. We enjoyed a very tasty takeaway on board together.

Yes, that's our little grandson's name, and actually the name they originally had in mind for him. It just took time for them to be sure about it! Here are some more up to date snaps of him, taken by Shireen (rapidly transforming into a doting mum!) 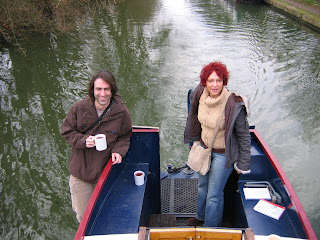 Shireen took Thor back on the train that night, Adam drove off the next morning and Jeremy stayed on board for 2 more days, getting some exercise by running back along the towpath to collect his car a couple of times! Then he went back home and Adam brought Rachel for a visit. First time she had steered a narrowboat, but she doesn't look TOO worried, does she?
We continued chugging northwards, including the long process of getting through Milton Keynes, which seems to treat the canal as a sort of linear park. Nicely done, but there is a lot of it! Just after 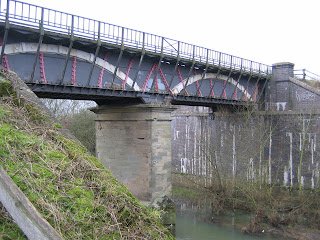 MK, we crossed the Great Ouse over an iron trough aqueduct dating from 1811, still in good order after nearly 200 years, and half a mile later the first lock for 11 miles started the canal's climb up towards Norton Junction.
You will be pleased to know that we got through the Stoke Bruerne locks on 2nd January, beating the deadline by 4 days, came through Blisworth Tunnel (3057 yards) the next day and are now enjoying a little break in Blisworth again before heading on northwards.

Posted by Dave and Val Taylor at 9:10 pm

It was good to share worship with you on Sunday and hear more of your great adventure.

You have become so naturally a part of our fellowship that perhaps God has some plans for your future that He has yet to reveal?

Thank you Val for your text - it certainly confirms our deepest desire for Blisworth and our prayers are focussed on this - certainly for 2008.

Got your E-mail. Interesting post, especially seeing the canal and locks in winter.
Thor looks like he is thriving.So Milton Keynes is as difficult to navigate in the water as on land then!
I enlarged teh sofa photo full screen to get a better look at your grown up family.
Blessings for 2008