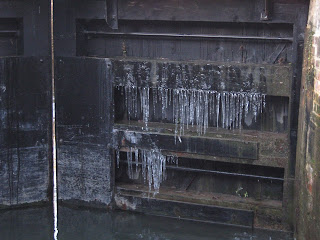 After Hungerford, we started to encounter more ice ON the canal, not just on slippery towpaths. Kintbury was fine, as we were moored in the river section, but the canal to the lock was iced over, with fine icicles hanging from the bottom lock gates. From there on, we tended to be crunching our way along, leaving a trail through the iced-up canal. We shall definitely need to re-black the hull this year, as ice is very effective at removing protective black bitumen!

And so it continued as we made our way towards Newbury. Six locks and 5½ miles would normally take us about 3¼ hours – this took us 4¼, and the ice was getting thicker as we went along. 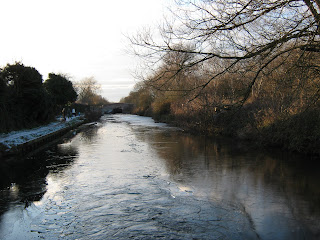 The Saturday afternoon walkers got some extra entertainment!

Just before Newbury, the river joined back in to the channel, and we had welcome relief from the constant crunching as well as the possibility of mooring in an ice-free section near West Mills. We wanted to avoid our previous experience of Newbury and were glad to be outside the town centre.
Walking on through the town, it was easy to see that our ice problem was going to continue. Greenham Lock was frozen solid with ice about an inch thick. Worth waiting another day to move on, but we couldn't delay too long. It was 20th December 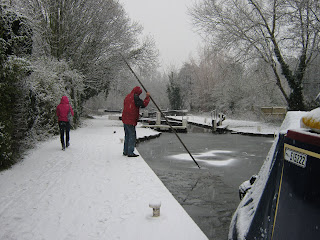 already; we had planned to be through Widmead Lock as soon as it re-opened after 18th December (though work had actually been finished early), plus we had arranged to have a pallet of tools from Switzerland delivered to the marina which was just below Greenham Lock. We could hardly come and ask for it in the middle of their festivities!
So the next day saw us bashing our way through the ice with boat and pole! We eventually made our way down Greenham Lock and called in to the marina for the pallet. Thanks to Pete, Steve and Stephanie at Greenham Lock Marina for their really friendly help and welcome!
After that, we were on a river section again and were able to cruise and moor without ice for a short while. Through Widmead Lock and on to Thatcham, through a mixture of clear water and ice. 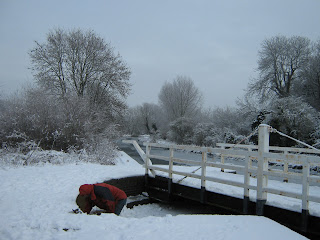 All the time, we were checking the Thames river conditions on the internet to make sure that we would be able to travel up from Reading to Oxford before some MORE locks closed for maintenance. There had been 'Strong Stream' warnings for a while, but now they began to be taken off. It was beginning to look hopeful, just so long as we could get there in time!
Now it wasn't just ice on the canal to contend with – the hand-operated swing bridges seemed to suffer from icing-up too! After clearing away as much ice and snow as we could, it still took two of us to persuade them to open. Sometimes it was two pushing, sometimes one pushing and one shaking the bridge to loosen it, and on two occasions we had to ask for help from people working nearby! 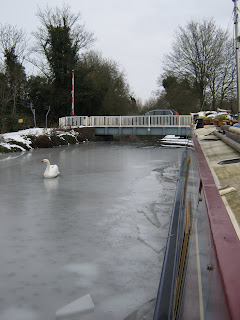 Even the electrically-operated swing bridges were not immune! We got through Woolhampton Bridge OK, but then it jammed with one of the barriers down, so the traffic couldn't pass and we couldn't retrieve our key. An engineer came out to lift the barrier manually, but we had to abandon our key – it was still stuck! This was December 23rd, and the country was shutting down for the holiday as well as the snow. Happily, we had a spare key!
We crunched our way through Aldermaston Wharf and under the lift bridge, though we were told that it had failed the day before! As we battled on through Padworth Lock, we had to start 'taking a run' at the ice in order to break it, so progress was becoming less and less possible. We finally had to admit defeat just before Padworth swing bridge. You can see how thick the ice was.
Not quite where we had expected to be on 24th December! Instead of joining us at Theale or on the Thames at Reading, Jeremy took the train to Aldermaston and walked along the canal to find us. We hadn't filled up with water at 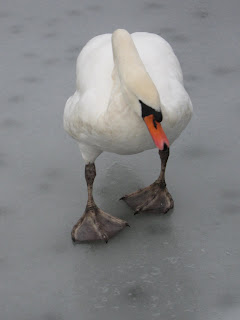 Aldermaston Wharf (the next water point wasn't far ahead!!), so we had to find somewhere to get some more. The caretaker of Padworth Village Hall, just 200-300 yards away, very helpfully let us fill our jerry can several times. Many thanks! The nearest 'shop' was a petrol station half a mile away!
Next morning, Dave went for his customary morning walk along the canal and came to the next swing bridge at Ufton. Just to see that all was OK, he put the key in to turn it on. Nothing happened, except that the key was held in again! We were really stuck, as we would need a key to get through Padworth swing bridge before we got to Ufton. Time to call the BW emergency hotline and, yes, there was someone there, and they would be able to send someone out in a couple of hours!
When the BW guys arrived, they could do nothing to get the bridge working or rescue our key and phoned their boss to tell him. He very kindly asked them to give us a spare key, and phoned Dave back to say that specialist contractors would be there to fix it on Sunday morning at 9 am – two days away!
Adam and Rachel joined us on 26th, together with their pet rats, so the boat had a full crew, even if it was immobile! Actually, we HAD moved about a mile, as the ice had melted enough, and we thought it was worth having the boat actually at the bridge for when the contractors came on 27th. We enjoyed a good time together, aided by the mulled wine we had bought in Newbury, the ample supplies of cheese which Adam and Jeremy had brought with them, and a meal out at the Blue Cobra (Thai and Bengali restaurant) in Theale.
On Sunday morning, the contractors came, went straight to the power supply and turned it back on! Apparently BW staff were not allowed to touch it – good old Health and Safety! We were free to move on, AND had our key back!
Posted by Dave and Val Taylor at 11:35 pm