On The Level Again!

When we came back through Denver Sluice on 9th June, it seemed a very long time since we had first come through – the other way – on 24th April. In those 6½ weeks, we had become accustomed 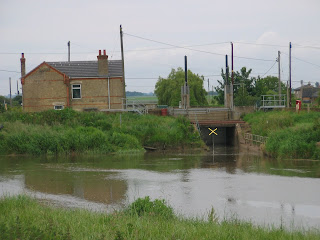 to the 'dual personality' of the Fenland rivers; sometimes hemmed in by high flood banks with very little to see from the boat, sometimes meandering through flat, lightly wooded countryside.

All the time, we had been developing a greater awareness of the unique nature of this area, where land level is often well below river water level and the threat of devastating floods has only receded in comparatively recent years, thanks to systematic drainage and flood relief measures.
Denver Sluice itself plays such a pivotal role in the whole process that it is specially significant as the gateway to the Fenland rivers. Now we were leaving as we came, through Denver, down half a mile of tidal Great Ouse, then nipping in to Salter's Lode lock to retrace our route through the Middle Level to Peterborough. 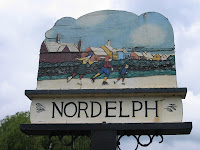 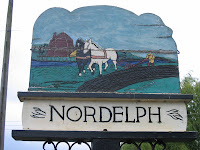 We showed you the inside of Salter's Lode lock as we came through it – here's a view of it from the tidal river side, taken when the tide was a little higher. Just imagine bringing 57feet of steel narrowboat downstream (from the left of the picture), moving fairly fast on the ebbing tide and trying to turn across the current to enter the lock between the yellow cross marker and the side wall – tricky, but not impossible, and we only bumped a little!
Back on the Middle Level and with plenty of time to spare, as we had an appointment in Peterborough, but not until 21st June, twelve days away. Time to dawdle! 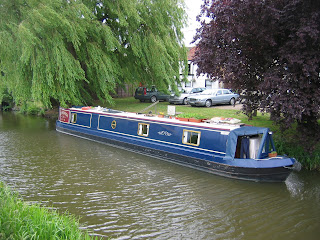 Just 2 miles from Salter's Lode lock is the little village of Nordelph. Last time, we just chugged straight through it, but did notice some public moorings as we came under the bridge. We needed to get some shopping, and the local bus route would take us into Downham Market, so here was our opportunity. We liked the village sign, with each side showing one distinctive characteristic of this area – farming (with a river and windpump in the background) and ice skating, with its long history in the Fens. The moorings are provided by the Well Creek Trust (WCT), along with others along the Well Creek, the section of the Middle Level which runs from Marmont Priory Lock to Salter's Lode.

After our shopping trip in Downham Market, we moved on just 4 m 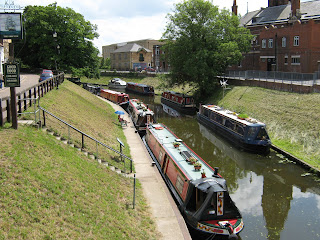 iles to the twin villages of Outwell and Upwell. On the way, we passed an unusual sight – a 'trig' (triangulation) point! As most countryside walkers know, these are always placed on the highest points in the landscape and are used in land surveying. So here we were, chugging along just a few feet below the highest point for miles around – we were certainly still in the Fens! We reached Upwell and moored on the WCT moorings there, as we had on the way through. We spent two nights there, sharing the moorings with four boats who were travelling together. They moved on before us and we next caught up with them in March. The picture shows nine boats moored near the Town Bridge – at one point there were thirteen! 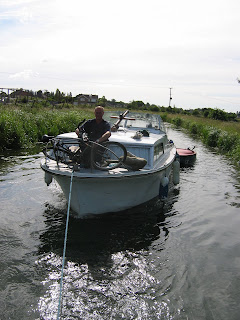 The four stayed there as we moved on to Whittlesey, where they caught up with us a few days later but left ahead of us. When we were about to move on, we were hailed by a small cruiser across the other side of the river – could we help him, as his steering had failed? He needed to get back to his mooring at Stanground, which was on our way, so it was simple enough to take his bow rope and soon we were towing 'Isla May' with Stephen on board!
In spite of the slight delay, we arrived early for our locking-through time at Stanground Sluice and were soon on our way into the outskirts of Peterborough, 2½ days early for our scheduled rendezvous.
Posted by Dave and Val Taylor at 8:03 pm

I see that you are still on the 'road'.