Farewell to the Ouse 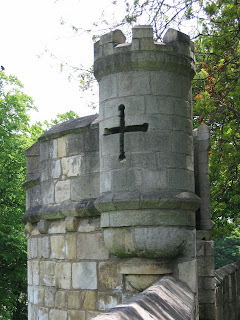 As planned, we returned downstream from Ripon to York on the way back down to Naburn to meet David and Mary. We took the opportunity to be tourists for a change and went on the York tour bus and had a little walk along part of the ancient city walls. After the lack of boat traffic and a sense of solitude and isolation further up the Ouse and on the Ure and the Ripon Canal, it was odd to be in the centre of a city with the river full of trip boats, small day hire boats and rowing club teams busy practising, as well as busy streets and railway lines within earshot. A fascinating old city, none the less!
As we passed under the disused railway bridge at Naburn, we got a better glimpse of the unusual 'statue' at one end of it. 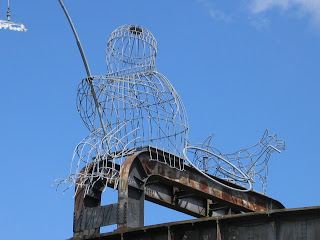 A close examination reveals that the fisherman has caught a steam engine!
Naburn was windy, as before, and the weather forecast was a bit gloomier for the next few days – and David and Mary were only staying two! Undaunted, we set off upstream again with them the next morning and, 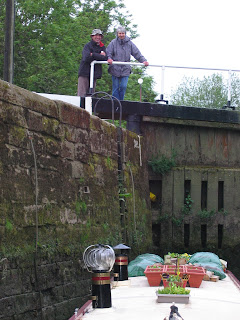 sure enough, the weather became steadily wetter! A brief stop in York, then on up the Ouse to Linton Lock – a very different journey from our trip up the Llangollen Canal together last year: hardly any other boats, very isolated countryside and only one lock to work. Here are D & M at the high top gates of Linton Lock, looking down at us on 'Zindagi' as the lock filled up.
The next morning, we turned around and headed back to York and Naburn again. David and Mary had to drive down to Devon the next day, and we were heading back down to Selby on the ebb tide, exactly 3 weeks after we had come up. 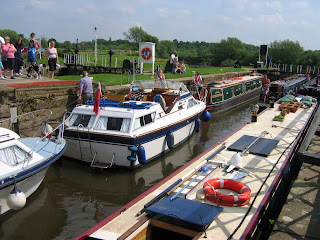 As we spent the evening on the moorings above the lock, more and more boats arrived: narrowboats like ours, small cruisers and larger ones like those we saw on the Thames last year. Looked like a busy day coming up!
Tide times meant that we needed to wait until the afternoon to go downstream, so there was ample time to see our visitors off before getting ready. All the usual daily engine checks, etc., plus the need to make sure the anchor was securely attached and to get our lifejackets ready to wear again – and the lock was certainly full of boats! 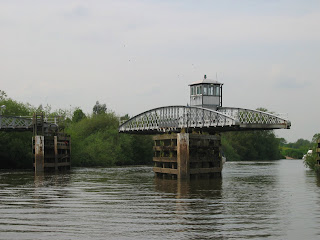 The lock-keeper let us four narrowboats down first, together with the smaller cruisers, as we didn't need so much depth of water and could only travel rather more slowly than the large cruisers. At least one more lock-full of boats followed us, maybe more. Rather different from 3 weeks before, when we were one of only two narrowboats making the trip up from Selby!
Of course the cruisers gradually overtook us, but our bonus was that we could look back and see the road bridge at Cawood swing open for them. We had simply sailed under with lots of room to spare!
And so, back to Selby, but not without some more interest. Selby lock is much smaller than Naburn, so the lock-keeper had already been busy with getting all the cruisers up it and the first two narrowboats were just about to go in as we arrived. They had been 'holding' on the river while they waited, and now it was our turn. Having turned to face upstream against the current, it was quite fun to judge the engine speed just right to stay in the same place. Moving the tiller allowed us to move from side to side, and a little acceleration or deceleration moved us slowly forwards or backwards. A bit like holding a car on a hill by using the clutch! Before the lock was ready for us to go in, the fourth narrowboat arrived and we could 'lock up' together – excellent timing.
Posted by Dave and Val Taylor at 6:26 pm