A Brief Visit to Devon 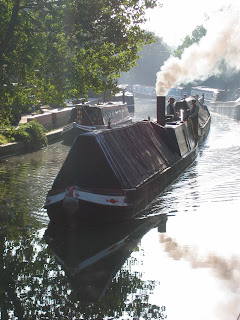 As we have hinted before, we had some different travelling to do in early September, as we were invited to Leigh and Martin's wedding at Ashburton on 8th September. But first we had a few other things to sort out . . .
We cruised back from Coventry via Braunston, where we saw the historic steam-powered narrowboat 'President' and its butty, 'Kildare', setting off to travel up the Ashby Canal, where we had just been!
We had arranged for a consignment of tools from Switzerland to be delivered to Whilton Chandlery, just below the flight of locks at Long Buckby. We arrived there on Wednesday 29th August, having been told by the carriers that the delivery MIGHT be there that day, but definitely by Thursday. No worries; we had booked the train tickets for Friday, even ordered the taxi.
By Thursday afternoon, nothing had happened, so we checked with the chandlery. Apparently the driver had phoned to say that an unexpected low bridge meant that he couldn't come by his planned route, so he might not make it. Frantic phone calls to the carriers to try to make sure that the delivery came before mid-day Friday – otherwise we would be on our way to Devon! 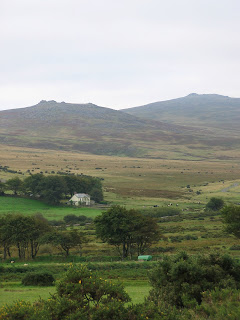 Well, it came, but only just in time! We locked up the boat, caught our taxi and took our train journey to Brighton. There we collected our car from Adam and drove on down to Devon the next day, to spend a few days with Dave and Mary, who had shared our trip up the Llangollen Canal back in early April. They live on the edge of Dartmoor, so there was a slight change of scenery!
Taking the opportunity to make essential visits to doctor and dentists, we had over a week in Devon, spending half of it with Dave & Mary and half with Joe and Wendy in Barnstaple. A little strange to be back there but 'of no fixed address'. Even stranger to visit Lapford to pick up some post! 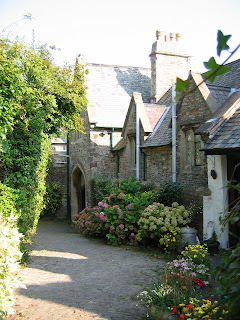 We really enjoyed our time with our friends in both places, getting out for walks together and just sitting and chatting. Here are the backs of some former almshouses near Joe and Wendy's house in Pilton, Barnstaple – different again! 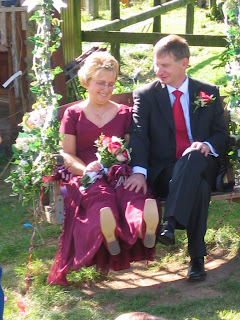 And then, of course, the main reason for the trip – Martin and Leigh's wedding! We took lots of photos, but perhaps this informal one captures the joy of the day for you!
Then back to the boat, via Brighton – VERY nearly missing our train connection at London Euston! Funny that having been 'home' to Devon, we felt that we were coming home to 'Zindagi'!
Posted by Dave and Val Taylor at 8:07 pm