North Up The Grand Union 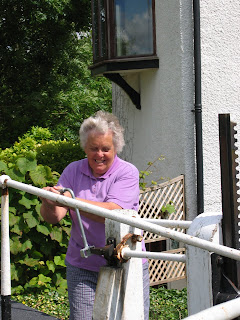 After our 'Grand Day Out' on the canal together, Sam and Sumana had to catch a plane the next morning, so Jeanette took them to Heathrow and then returned to Rickmansworth – but then joined us for a few days on the canal as we continued north up the Grand Union. No need to tell you that she is something of a canal enthusiast – just look at the picture! 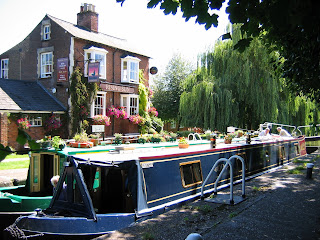 This stretch of the Grand Union was new to all 3 of us and once again were surprised to enjoy remarkably rural surroundings as we travelled through Hertfordshire and Buckinghamshire. Through Hemel Hempstead and Berkhamsted (where this pub The Rising Sun is beautifully situated next to the canal) and northwards towards the 'summit' at Tring.
Apparently, before a pump was installed, the old working narrowboats often used to have to wait for ages in dry summers, as the summit level keeps losing water down the locks both sides, to the tune of about 200,000 gallons of water per boat! 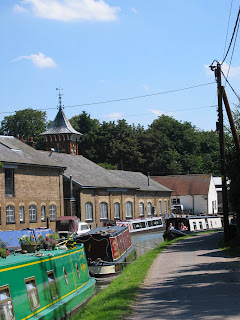 Fortunately (in some ways!), this is hardly a dry summer, and the pump is in action these days, so we reached the old British Waterways workshops at Bulbourne with no difficulty, and enjoyed a good Sunday lunch together in the pub opposite. It was certainly busy, with boaters and others, so after lunch we decided to 'hide' down the Wendover Arm just a short distance away. This canal used to connect right through to Wendover, nearly 7 miles away, but now we could only go about a mile along it – but restoration is actively under way! Here is an unusual picture of a new bridge over a dry canal – one for the future, perhaps? 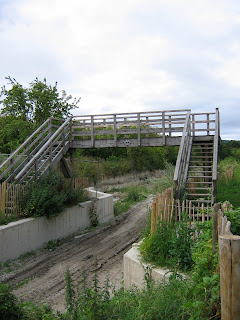 Then down seven locks from the summit on the other side, where we turned left down the Aylesbury Arm. This is a narrow canal (locks only 7 feet wide) and we specially like narrow canals. It's not just the smaller locks (easier and quicker to work!) but the whole scale of things seems more human, somehow. 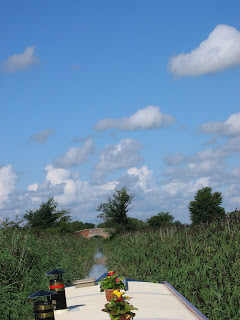 Some of the locks had water pouring over the top gates and there were several sections where we were cruising through a corridor of reeds. We trundled slowly to Aylesbury, where Jeanette caught a train back home and we turned around to retrace our route, but not before Val had bought herself a sun hat – proves at least that the summer has not been ALL rain! 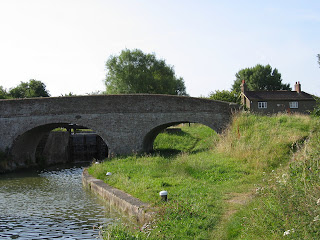 Back to the Grand Union 'Main Line' and down some more (wide) locks. . . Some of the bridges below them were built 'double', apparently as the canal company expected to need to build second locks next to the first ones – but then the railways came along!
All the way down these locks until we reached the edge of the enormous Bletchley / Milton Keynes conurbation. Our map book showed mile after mile of lockless canal winding all round Milton Keynes, and we expected to have to plunge through as quickly as possible to avoid too much urban desolation – how wrong we were! It seems that the town was built around the canal, using it as a sort of linear park in some places and leaving it pretty much wild in others. A very pleasant surprise indeed. 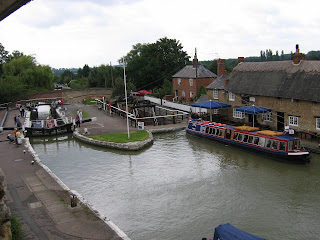 After more than 10 miles of 'flat' cruising, we started climbing again, slowly at first with just one single lock and then with the flight of seven leading up to Stoke Bruerne. This is a well-known canal centre, partly because of the Canal Museum but also because of the way the village seems to focus on the canalside – it was absolutely full of visitors! Here is the top lock (with a disused dry dock beside it), as seen from the top floor of the museum the next day (Monday – much quieter). 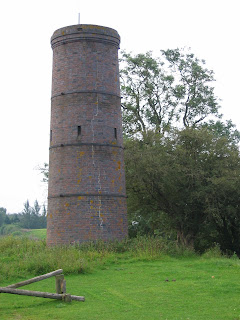 We waited just outside the village overnight before visiting the museum and making the short journey through the hill via Blisworth Tunnel to the much sleepier village of Blisworth, to collect our mail. We could show you a picture of the tunnel, but that is just black with the lights of two oncoming boats in the distance. Here instead is the tower of one of the ventilation shafts, on the hilltop above! Lots of water pouring down on us from the tunnel roof – probably our wettest tunnel yet.
Just a mile on from Blisworth, and we were back on familiar territory. Our 'share' boat was moored at Gayton Junction for while, so we have travelled up and down the next stretch a few times before. Not bad countryside, but first the main railway line to Scotland, then the A5, followed by the M1 all seem to want to share the same space as the canal! The motorway is really noisy all the time! 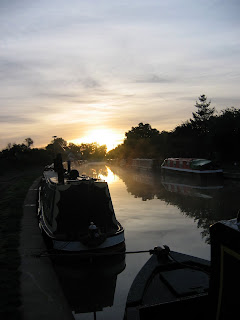 Gradually we lost each one again, and fortunately the M1 was the first to go. Under the A5 bridge and up the last lock to the wharf at Norton Junction – here it is on a misty October morning in 2005.
Overnight there before heading west through another tunnel (much drier) to Braunston, where we are now. This is another well-known canal village, but probably has the worst mobile internet reception that we have found yet. This 'blog' has taken much longer than usual to publish, and we spent most of yesterday trying to buy some train tickets over the internet (and eventually succeeding). As you will realise, some different travelling coming soon – we 'll tell you about it later.

Posted by Dave and Val Taylor at 3:35 pm

Interesting to catch up.
The corridor of reeds looks scarey.
Love to your both.